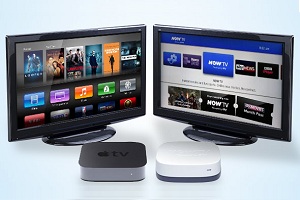 We put 11 models in our latest test: Apple TV, Microsoft and Netgear streaming devices, plus 8 Freeview/Freesat boxes such as EE TV, a Panasonic PVR and Blu-ray player, and new sub-£100 BT YouView box.

Do you want a set-top box to watch Freeview or Freesat TV, a PVR to watch/record, or a way to stream films and catch-up TV such as BBC iPlayer? In our latest batch we’ve tested a variety of models and found the best of the crop. Five did so well in our tests we’ve named them Best Buys, but three should be avoided.

Find out which models we recommend as your TV’s perfect partner by heading to our PVR reviews, set-top box reviews, or TV streaming device reviews.

If you fancy watching catch-up and film services on the big screen but don’t want a new smart TV, then we’ve tested ‘smart’ set-top boxes, PVRs and streaming devices which give similar services and features for less than £50.

At £49, the Apple TV streaming device is a cheap way to add ‘smart’ features. It lets you access a range of video, music and photo apps over wi-fi, and AirPlay mirroring lets you share the screen of Apple iOS devices on your TV. We’ve also tested two other similar streaming devices; the £45 Microsoft Wireless Display Adapter, which mirrors the screen of Windows PCs, laptops, tablets and phones, and the Netgear Push2TV PTV3000 for Amazon devices.

One of these models did so well it earned a score of 85% in our tests, making it the second highest-scoring streamer we’ve tested.

PVRs and boxes to watch, record and catch-up with free TV

If you want to record your favourite TV programmes, a PVR is ideal. As well as recording free-to-air channels, many also add ‘smart’ services and can be bought for a one-off cost, such as the Bush 500GB Freesat+ box (£130). We’ve also tested the new EE TV box which is available to EE customers taking a broadband and TV contract.

And if you want it all, the Panasonic DMR-BWT740EB offers Freeview HD, recording, BBC iPlayer and Netflix among its ‘smart’ services, screen mirroring, plays Blu-rays in 3D and 4K quality – and records to discs, too.

Which PVRs, set-top boxes and TV streaming devices have we reviewed?