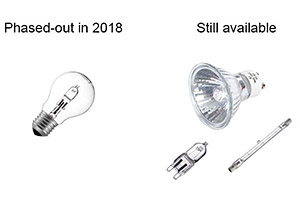 Halogen light bulbs will remain on the shelves for two extra years after EU member states delayed the phasing-out of halogen bulbs until 2018.

The original ban was supposed to start in 2016, but concerns have been raised about the availability, cost and quality of LED light bulbs, a more efficient alternative to halogens.

But you don’t have to wait until 2018 to save energy and money on your lighting. Look at our full to find out which bulbs we recommend as Best Buys, including Best Buy spotlight LEDs for just £5.

But the 2018 ban on halogen bulbs doesn’t apply to all halogens. It mainly covers pear-shaped bulbs (see image above) that look like conventional incandescent lamps but contain a halogen component. It doesn’t apply to spotlights or to halogen lamps used in desk lamps and flood lights.

The phasing-out of halogen bulbs was originally supposed to take place in 2016 but the EU has postponed the ban to 2018. The industry said that it needs more time to develop LEDs with features that consumers are accustomed to, such as standard dimming, multi-directional light beams, and good colour rendering, at an affordable price.

Which? supports delaying the ban until 2018 as it should give more time for some of the compatibility and user issues to be resolved and allow a smoother transition to super-efficient domestic lighting across Europe.

Save with LED light bulbs

LED light bulbs can save you a lot of money – a halogen bulb often uses five times as much energy as an energy-efficient LED.

Replacing only six 50W halogen or incandescent light bulbs with six equivalent LEDs could save you £32 a year.

Replacing your lights with LEDs can still be a significant investment – we’ve tested some that cost £40 each – so it’s important you choose the best ones for you or you could be wasting money. Read our to find out which are the best ones.