If you bought a car advertised as offering fuel economy of 148 miles-per-gallon, but it then failed to deliver more than 67mpg – less than half – you’d be pretty disappointed. You’d also be spending a whopping £459 more a year on fuel than you expected. 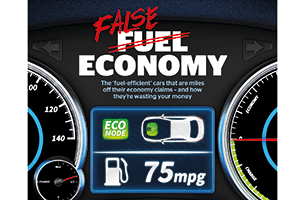 Astonishingly, that’s exactly the situation you could be in if you bought a Mitsubishi Outlander PHEV – a plug-in hybrid that is marketed on the strength of its efficiency.

But Mitsubishi’s SUV is far from the only car that fails to reach its official fuel economy figure – in fact, Which? testing has found that 98% of the 200 cars we assessed over the past two years couldn’t match or beat their mpg claims, with all but three missing their official figures.

On average, motorists are spending an additional £133 a year on fuel, according to our tested mpg figures compared to the official figures listed on carmakers’ websites.

That’s because the EU test that defines the official mpg figures – the ones carmakers have to show on in their marketing to conform to the relevant regulations – is outdated and no longer fit-for-purpose.

The bare bones of the test have been used since the 1970s, was last updated in 1997, doesn’t account for modern engine technology such as hybrid power, and does a poor job of reflecting real-world driving conditions.

That’s why Which? is now calling for it to be replaced with a better test in 2017, as scheduled, rather than being delayed until 2020.

The testing that underpins every Which? car review is designed to give consumers the most accurate picture possible of how their car will perform in everyday life – so when assessing fuel economy, unlike the official EU test, we include a motorway cycle, switch on the lights and air con, and inflate tyres to the recommended pressures.

And if a car has different driving modes available, we use the one it starts up in by default, rather than switching to an ‘eco’ one, which may offer better economy, but will also often neuter a car’s performance to the point it’s awful to drive.

Like every product Which? reviews, each car we assess is put through exactly the same testing process, meaning our reviews are fully comparable. Coupled with unmatched reliability data the UK’s most accurate and robust survey of car owners, that means they’re the best way to choose the perfect car for your needs.

So, don’t be misled by fantasy fuel economy figures – if you’re in the market for a new motor, make sure you read the Which? review first.