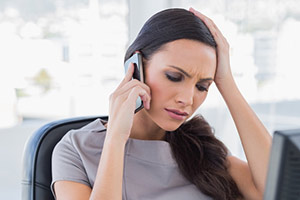 Companies plaguing households with unsolicited nuisance calls and texts can be investigated and fined up to £500,000 with less difficulty from today.

The changes are good news for the public who are bombarded by unwanted calls and texts on a daily basis.

The legal changes have come as a result of the first comprehensive and co-ordinated effort to tackle nuisance calls.

Are you being bombarded by cold calls? Read our step-by-step guide to stop nuisance calls.

The law now makes intervention easier, so the Information Commissioner’s Office (ICO) will be able to act when calls cause ‘nuisance, annoyance, inconvenience or anxiety’.

It will be more straightforward to impose tough penalties on the companies behind persistent nuisance calls and texts such as those promising compensation for PPI mis-selling and unsolicited calls from personal injury claims companies.

The ICO are even warning of an increase in nuisance calls and texts in response to upcoming pension freedom changes.

Digital Economy Minister Ed Vaizey said: ‘For far too long companies have bombarded people with unwanted marketing calls and texts, and escaped punishment because they did not cause enough harm.’

Previously the ICO had to prove that messages were causing ‘substantial damage or substantial distress’ before taking action against those responsible.

A win for consumers

The change in a law is a great win for consumers after more than 170,000 people made their voices heard by signing the Which? petition to call time on nuisance calls and texts.

Which? executive director Richard Lloyd said: ‘Unwanted calls disrupt the lives of millions every day, so it is good news it’s now easier for regulators to prosecute nuisance callers.

‘Regulators must send a crystal clear message to firms that nuisance calling is unacceptable by using these new powers to maximum effect.

‘We urge everyone to report their unwanted calls and texts to help regulators identify firms flouting the rules.’

Companies or organisations making automated marketing calls are legally meant to have the permission of the person they are calling.