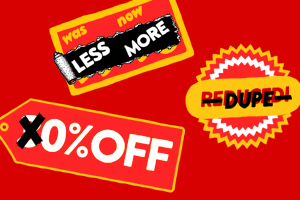 We’ve found retailers are confusing consumers with tactics that exaggerate discounts and manipulate shoppers, so we’re using our legal powers to take the issue to the regulator, the Competition and Markets Authority (CMA).

From dodgy multi-buys to baffling sales offers, many retailers are creating the illusion of savings that don’t exist. These tactics manipulate consumer spending by misleading people into choosing products they may not have picked if they knew the full facts.

About 40% of groceries (by revenue) in Great Britain are currently sold on promotion. With £115 billion spent on groceries and toiletries in 2013, consumers could be collectively losing out to the tune of hundreds of millions of pounds, even if only a very small proportion of offers are misleading.

Some of the issues we have raised with the CMA:

Multi-buys –  prices increasing when going on multi-buy so that the saving is less than claimed, non-existent or products are more expensive when they are included in the multi-buy. Asda increased the price of a Chicago Town Four Cheese Pizza Two-Pack from £1.50 to £2 as it went onto multi-buy at two for £3. It went back to £1.50 as the ‘offer’ ended (2014).

Larger pack better value – where the individual item price of the bigger pack is actually more expensive. Tesco sold four cans of Green Giant Original Sweetcorn for £2 (was £2.44), but six cans were proportionately more expensive, at £3.56. That’s despite the fact the larger pack said ‘special value’ (2014).

Seasonal offers – where the higher price only applied out of season. We found a Nestle Kit Kat Chunky Collection Giant Egg was advertised at £7.49 for just 10 days in January at Ocado, but then sold on offer at £5 for 51 days (2015).

Which? has repeatedly raised the issue of unfair and misleading pricing tactics in the grocery sector but little has changed. So we’re using our legal powers to act on your behalf, submitting a ‘super-complaint’ to the CMA.

Which? executive director Richard Lloyd said: ‘Despite Which? repeatedly exposing misleading and confusing pricing tactics, and calling for voluntary change by the retailers, these dodgy offers remain on numerous supermarket shelves. Shoppers think they’re getting a bargain but in reality it’s impossible for any consumer to know if they’re genuinely getting a fair deal.

‘We’re saying enough is enough and using one of the most powerful legal weapons in our armoury to act on behalf of consumers by launching a super-complaint to the regulator. We want an end to misleading pricing tactics and for all retailers to use fair pricing that people can trust.’