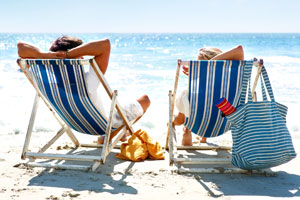 More than 1,500 cases of holiday booking fraud were reported to the police action fraud team in 2014 according to the National Fraud Intelligence Bureau.

The most common types of fraud related to fake air tickets, bogus online adverts, hacked accounts and dodgy websites, with those aged 30-49 most commonly targeted.

Losses are not just financial

In one case, a family travelled to Cornwall for a week-long break at a cost of £1,500, only to find the website they had used to book their holiday had been hacked and the bank details altered.

As a result they they were unable to use the accommodation or retrieve their money.

Losses are not just financial though. A third of people who were scammed said the fraud had a substantial impact on their health and financial wellbeing.

More than 160 people reported the impact of the crime was so severe they had to receive medical treatment.

If you’re looking for a holiday deal there are easy steps you can take to minimise your risk of getting scammed.

Don’t just rely on one review but do a thorough online search to ensure the company is credible. If they’re suspect, other people may well have posted their experiences warning people off.

If something sounds too good to be true – it probably is. If it doesn’t feel right then question it.

Check whether the company is a member of a trade body. The UK’s largest travel association is Abta, which provides a code of conduct for their members to abide by.

Customers travelling with companies that are Abta members can be reassured they have a greater level of protection should things go wrong.

By law, every UK travel company which sells air holidays and flights is required to hold an Atol, which stands for Air Travel Organiser’s Licence.

This offers consumers financial protection in the event of a travel company failure or if something goes wrong and you’re stranded abroad.

3. Pay with a credit or debit card

The majority of those who had been defrauded last year paid with a bank transfer or cash which left them with no means of getting their money back.

Only a small proportion of those scammed paid by credit or debit card, where some form of redress is available to them.

If you spend more than £100 on your credit card, you have rights under Section 75 of the Consumer Credit Act.

It’s a good idea to pay for some of your holiday, if not all, using your credit card. Just make sure you pay off the balance on your card afterwards.

Chargeback allows you to ask your card provider to reverse a transaction if there’s a problem with something you’ve bought on your credit card (for under £100) or on a debit card.

But it’s worth checking with your bank as it’s a voluntary scheme and rules may vary between the Visa, Maestro and American Express networks.

Sports and religious trips have often proved to be an attractive target for fraudsters due to limited availability and consequent higher prices, according to the study.

If you’re booking tickets for a big sporting event,  minimise your fraud risk and buy through an official ticket seller. You can usually find these through the event’s official website.

5. Watch out for copycat websites

A Which? investigation into scams in 2013 found half of those who came into contact with copycat websites were fooled by them.

These websites dress up like legitimate sites and use advertisements to appear high on Google searches.

They then get you to fill in forms, charging an ‘administration’ fee, even though there’s no administration needed and you can usually go through the process yourself for free.

Travellers looking for a European Health Insurance Card (EHIC), which you can get for free from the NHS, are a popular target for copycat sites.

The websites avoid breaking the law by stating that they’re not affiliated with the official body. Always check the homepage for any mention of this.

You should also be alert to .org web addresses as these don’t guarantee you’re dealing with an official site.