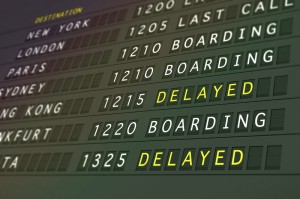 Some claims management firms offer to help you claim compensation for a delayed flight – but our research shows that they can take up to a third of your compensation.

Rulings by the Supreme Court last year confirmed that you could claim compensation if a flight had been delayed in the last six years, including if the delay was due to ‘technical’ reasons.

Since then, claims management companies (CMCs) have flooded the market, offering to handle claims against airlines. All they ask in return is a hefty slice of compensation –  up to 29%, plus VAT, with an admin fee in some cases.

If you’ve had flight travel trouble, find out whether you can claim compensation for flight delays or cancellations.

How much do claims firms take?

Here’s the compensation you’d get on a £435 claim from some of the most prominent CMCs:

*Amount deducted includes VAT and, where applicable, additional fees. Some figures are rounded to the nearest pound. Exchange rate: £1 = €1.38

Flightdelays.co.uk and Planedelays.co.uk charge the most of the CMCs we’ve seen. With each one, if you were claiming for the maximum amount of £435 (€600), you’d lose £176 to the CMC– leaving you just £259 in compensation.

How can I make a claim?

The Denied Boarding Regulation applies to passengers departing from an airport within the EU, whatever the airline. This means you’re entitled to claim compensation if your flight is cancelled or delayed by more than three hours.

You should cut out the middleman and use our flight delay compensation template letter to make your claim and keep all your compensation.

There is an exception to the right to compensation – if the carrier can prove that the cancellation is caused by extraordinary circumstances that could not have been avoided even if all reasonable measures had been taken.

Which circumstances are extraordinary?

If your airline denies compensation for delay due to extraordinary circumstances, refer them to the Supreme court rulings in Huzar v Jet2 and Dawson v Thomson, and tell your airline that you want them to reconsider your claim.

We’ve heard reports from various CMCs that some airlines have started saying that technical faults causing delays have been ‘hidden manufacturing defects’ and, as such, claims may have to go through the court again to determine whether or not there have been extraordinary circumstances.

CMCs can be used as a last resort if you’re struggling or if you don’t want the hassle of claiming yourself. But if the airline refuses to compensate a CMC they have no power to issue proceedings against the airline.

In this case you’d  need to either issue proceedings against the airline yourself, making sure all the information is accurate otherwise the claim can be dismissed by the court, or instruct a reputable solicitor to issue proceedings on your behalf.