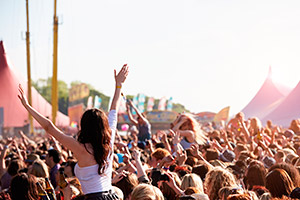 This is largely due to the number of UK festivals and high-profile concerts taking place, giving ticket fraudsters far more opportunities to strike.

These figures come after the National Fraud Intelligence Bureau (NFIB) said one third of crime reports related to ticket fraud in 2014 happened in just three months – May, June and July.

Avoid getting caught out by dodgy ticket scams and learn how to identify a legitimate ticketing website.

Unsurprisingly, nearly three quarters of fraud victims stated that the first contact they had with a suspect was through the internet.

The warning is too late for hundreds of concert goers who have complained to fraud investigators after tickets purchased from online ticket website Circle Tickets failed to show up.

Of the 533 reports Action Fraud has received so far in June, 228 mentioned Circle Tickets, which has recently ceased trading online.

The firm was advertising tickets for shows like Taylor Swift, Ed Sheeran and AC/DC – some for more than £100 each.

Last year’s Beyonce and One Direction tours were fraudster hot spots according to the NFIB figures, with nearly 6% of all reports in 2014 relating to these two artists.

Both Beyonce and One Direction have a huge teenage following which is likely to have contributed to the 6% rise in teenagers being targeted by ticket scams.

This shows that’s when it comes to buying tickets for high-profile concerts that have or are likely to sell out, it’s important to make sure the site and person you buy from is legitimate.

Wherever possible always use a payment card to purchase tickets rather than via bank transfers directly into people’s account or you won’t be covered if anything goes wrong.