Do you ever feel that your car burns through a tank of fuel at a much faster rate than you expected?

If so, you’re not alone. We’ve found that medium-sized petrol engine cars from the likes of Alfa Romeo, Volvo and Audi can be as much as 29% less fuel efficient than the official MPG figures used by manufacturers in their advertising.

In fact, only medium cars from five brands – Hyundai (3%) and Kia (5%) – came within 5% of the more accurate MPG results achieved through our expert lab testing.

EU law requires carmakers to show official test figures in their adverts to help consumers compare fuel economy between different models. But we think the figures should also reflect real-world driving – and if a brand quotes an MPG figure in its adverts, a consumer should be able to achieve it in normal use.

That’s why it’s vital the EU test is updated to be more accurate in 2017 as planned, and not delayed to 2020 as some manufacturers would prefer. 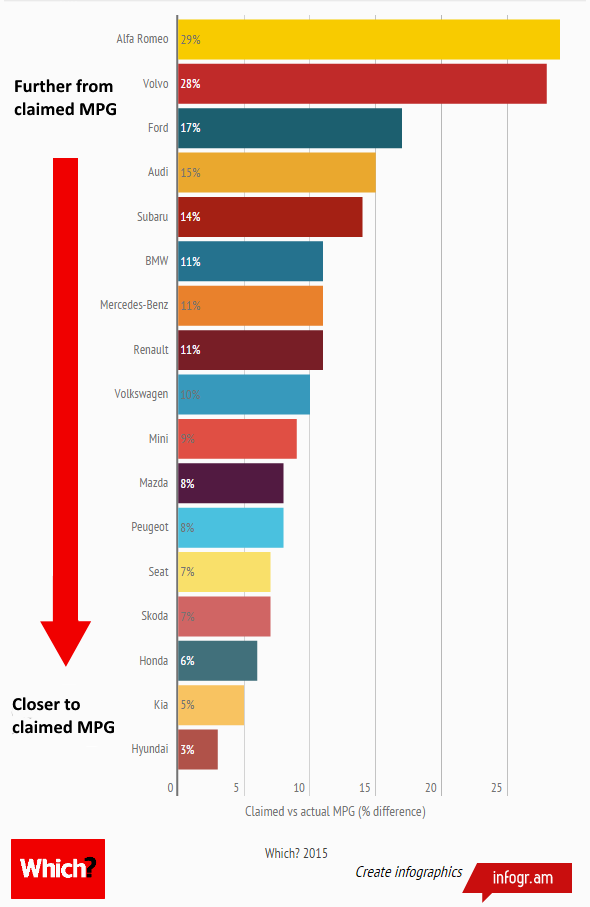 Which cars were included in the study?

How we test MPG

The testing that underpins every Which? car review is designed to give consumers the most accurate picture possible of how their car will perform in everyday life. So when assessing fuel economy, unlike the official EU test, we include a motorway driving simulation, switch on the lights and air con, and inflate tyres to the recommended pressures.

Update: This page was corrected  on 26th June 2015 to fix an inconsistency in the MPG data displayed in the graphic.