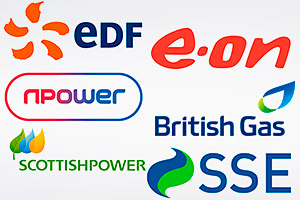 The big six energy suppliers are being investigated by the CMA

The Competition and Markets Authority (CMA) investigation into the British energy market has found that millions of customers have been paying too much towards their energy bills. Collectively, we have all been overpaying at a rate of 1.2bn a year.

The announcement is part of a report published today by the CMA stating what it thinks needs to happen to fix the British energy market in its year-long investigation.

Which? executive director, Richard Lloyd, said: ‘This is a damning indictment of how the energy market is failing consumers, with the biggest suppliers taking advantage of millions of households who have also been hit with the costs of government energy policy.

‘Now that we have a clear, official assessment of what’s wrong, we want the regulators to work with consumers to make sure their reforms will be effective this time. In the meantime, it’s right to put in place strong extra protection for consumers who don’t, for whatever reason, get a fair and competitive price. We also expect the big suppliers to quickly put in place changes that will bring more transparency and competition in the wholesale energy market.’

Energy bills should be lower

British households are overpaying for their energy by around £1.2 billion a year and are failing to switch to get the best deals, the Competition and Markets Authority (CMA) said today.

The CMA found tariffs offered by the big six energy suppliers – who have over 90% market share between them – were around 5% higher than they should be between 2009 and 2013.

Which?’s own research, a few months earlier, also found that energy bills should be up to £145 lower as suppliers failed to pass on a drop in wholesale prices to customers.

‘Sticky’ customers paying too much

The inquiry also found that dual fuel customers could save an average of £160 a year by switching to a cheaper deal. About 70% of customers are currently on the ‘default’ standard variable tariff, despite the presence of generally cheaper fixed-rate deals.

The CMA will be considering whether it should introduce a transitional price cap on the most expensive tariffs. This would protect customers until competition is working as it should in the energy market.

To help vulnerable customers, the CMA has proposed that those on pre-payment meters, who are often charged the highest tariffs, should be the first to receive smart meters when the national roll-out gets underway.

In the mean time, make sure you are not overpaying – check if you could save by using our independent comparison site Which? Switch.

No break-up of big energy companies

The way the big energy companies are structured has been investigated as some felt that vertical integration – this is where energy companies generate the energy and also supply it to consumers – was leading to higher prices.

But the CMA is proposing not to break up the energy giants. Instead, it wants to encourage consumers to switch suppliers.

The CMA is also proposing a reversal of the regulator, Ofgem’s, decision last year to limit companies to offering just four tariffs.

The ruling was meant to combat the hundreds of offers that confused consumers. But the CMA thinks this has done little to improve competition.

These are so far recommendations (provisional remedies), and there will now be further consultation before the CMA publishes its final remedies in December.