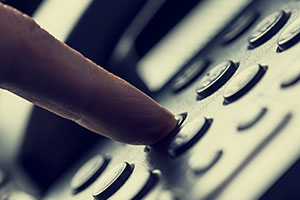 The amount lost rose from £7m in 2013 to nearly £24 million last year with 58% of people reporting they’d received suspicious calls.

The figures released by FFA UK refer to vishing scams in particular.

Vishing is a phone scam where fraudsters impersonate someone from a bank, the police or a company, like your internet provider.

Don’t put all your faith in caller ID to sieve out the scammers. Some use cheaply-available technology to mimic the phone number they want to impersonate – this is known as number spoofing.

Two in five scams reported to the Citizens Advice started with a cold call – here are five scam phone calls you need to hang up on immediately.

The caller claims to be from your bank and says there’s a lock on your account or a hold has been placed on your debit card.

You’re usually asked to verify your financial information, giving your personal information to the con artists.

Increasingly, these scams have involved a crook at the end of the line attempting to persuade you that your account has been compromised and to transfer your money to a new ‘safe’ account.

Share scams are often run from ‘boiler rooms’ where scammers cold-call investors offering them worthless, overpriced or even non-existent shares.

You will often be told that you need to make a quick decision or miss out on the deal. Remember, if it sounds too good to be true, it probably is.

You may receive a text saying to call a certain number or check a particular website to win a prize.

These text messages are used to lure you onto fraudulent websites or invite you to call a premium rate mobile number or download malicious content via your phone or computer.

A cold caller will claim to be from Microsoft tech support and tell you your computer is infected with a virus.

They’ll often request remote access to your computer to fix the problem, or get you to pay for worthless anti-virus software.

Letting a stranger get into your computer gives them access to tons of your personal and financial data so don’t be tempted to allow someone else to access your machine.

You’ll get a call claiming to be from HMRC saying you’re owed a tax rebate, and they just need to know some personal and financial information so they can give you your money.

But have you ever known HMRC to be so keen to hand over cash? As tempting as it is you’ll never see a penny and this scam can give criminals enough on you to commit identity fraud.

This July is Scams Awareness Month which aims to highlight how scams can flourish if they go unreported, with current estimates from Citizens Advice suggesting that as few as 5% of scams are reported.

The campaign, supported by Trading Standards, is urging people to get advice if they think they’ve been conned, and to warn others.

It’s hoped that scams will be stopped from spreading if people speak up and report them.