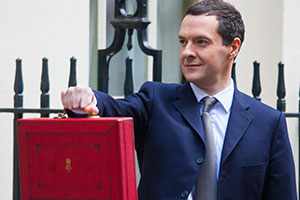 The Chancellor today unveiled a faster than expected rise in the higher rate tax threshold as part of a series of measures affecting income and savings in the emergency summer Budget.

George Osborne also announced a bigger than expected increase in the personal tax threshold and a surprise boost for investors, who will benefit from tax free dividends from next year.

Here, we explain what the announcements mean for you.

The Chancellor confirmed his commitment to increase the threshold for the higher rate of income tax over the course of this parliament.

Income Tax: How the Summer Budget 2015 will affect you

The changes mean that a couple will be able to earn six figures between them without incurring higher rate tax by 2020.

Basic rate tax will remain at 20%, while the additional 45% rate of tax for those earning more than £150,000 will remain in place, despite some speculation before the Budget that it was set to be scrapped.

When you invest in the stock market, you receive your share of company profits through dividends. Currently, these have 10% deducted at source. The Chancellor announced that he will abolish this deduction.

Instead, investors will receive a £5,000 allowance, meaning the first £5,000 of dividend income will be tax free. After this, a basic tax rate of 7.5% will apply. A higher rate of 32.5% will also apply for higher rate taxpayers, and 38.1% for additional rate taxpayers. This reform will come in for the 2016/17 tax year.

In his March Budget, the Chancellor announced a new personal savings allowance that would let basic rate taxpayers receive £1,000 of interest tax free from the 2016/17 financial year. The threshold will be £500 for higher rate taxpayers. Additional rate tax payers will need to pay tax on all interest.

He said the combination of the personal savings allowance, higher personal tax threshold, and dividend allowance meant that basic-rate taxpayers could receive £17,000 of annual income tax free from April 2016.

Find out more: Tax on savings and investments