Cars from the likes of Vauxhall, BMW and Jeep could be costing their owners up to £850 extra in fuel each year, based on our fuel-economy testing. Read on to find out if you’re affected.

We all have our own tactics when it comes to getting more miles from a full tank – whether it’s cruising at a constant 70mph on the motorway, or changing gear efficiently.

But, no matter how carefully you drive, some cars will cost you much more than you may have anticipated, especially if you took the official fuel-economy figures at face value.

Our testing has found models such as the Vauxhall Corsa, BMW X4, Mitsubishi Outlander and Lexus GS could cost you upwards of £350 more each year for every 10,000 miles you drive – enough to pay for the car’s annual service with change to spare.

The worst offender in our study, the Jeep Grand Cherokee, could cost you a huge £854 more to run than you’d expect based on the official mpg claims. That’s the equivalent of a return flight to Florida this winter.

Does your car deliver the fuel economy you expect? Scroll down for our list of the most misleading models and the extra costs owners could incur.

Difference in fuel costs per year 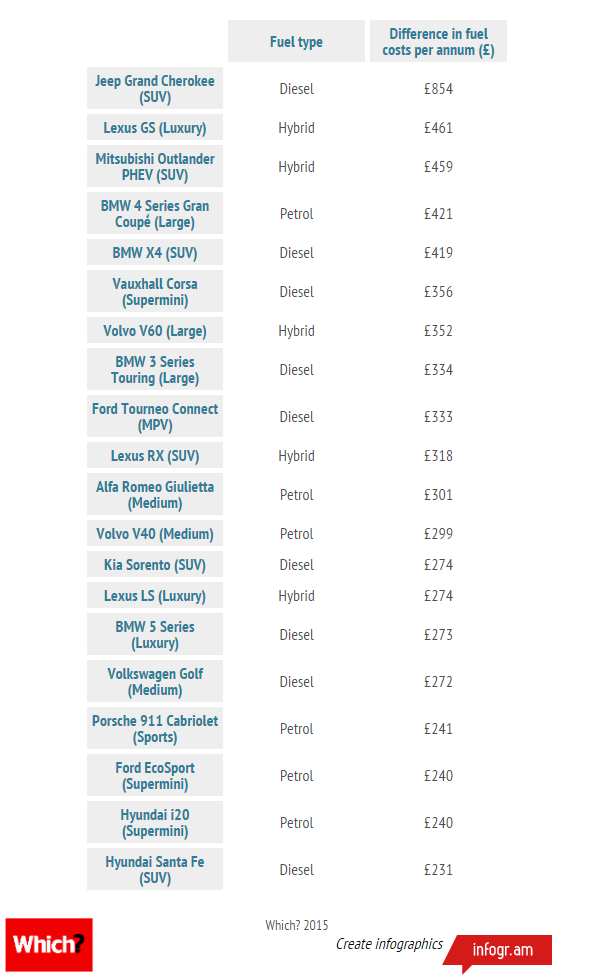 The test’s lack of real-world driving scenarios and numerous loopholes makes the figures it generates unachievable when you get behind the wheel of a car.