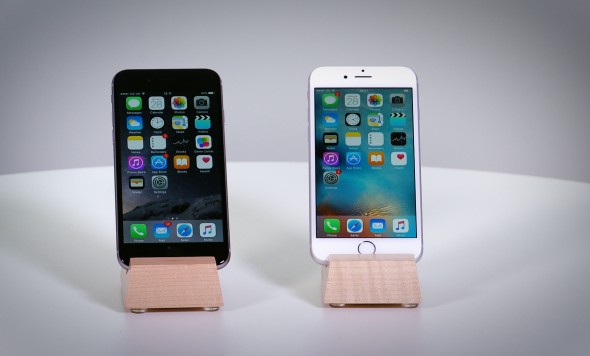 The iPhone 6s is out. It features a new pressure sensitive screen and high-resolution cameras. But is it really much better than the iPhone 6? Read on for our verdict.

The new Apple iPhone 6s has hit shelves across the UK causing queues of fans to form outside Apple stores as they hope to get their hands on one. But it looks almost identical to its predecessor – so it is really worth all the fuss? We compare the iPhone 6 and iPhone 6s to see what’s changed and whether it’s worth upgrading.

Best Buy mobile phones – find out which phones come out on top in our tests.

Taptastic screen – The headline feature on the iPhone 6s is its new 3D Touch screen. This means that the display senses how hard you press and reacts accordingly. For example, press the ‘Phone’ icon firmly for a second or two and it’ll give you the option to ‘add new contact’. Tap it normally and it takes you directly into the Phone app. This feature saves a few milliseconds when navigating around your phone, but it isn’t revolutionary and certainly not compelling enough to be worth upgrading.

Impressive cameras – The next key difference between the iPhone 6 and the 6s is that the latter benefits from upgraded cameras. The resolution of the rear-facing snapper has gone from 8Mp on the iPhone 6 to 12Mp on the 6s. We’re already very impressed by the camera on the original, which takes such detailed shots that we feel it can easily rival dedicated compact cameras. We’ll have to wait for the official verdict from the lab to be sure exactly how much of a difference the extra megapixels really make.

It’s also possible to shoot 4K video on the iPhone 6s – not something that you can do on the iPhone 6. This makes for incredibly detailed home movies, but unless you have a 4K TV or screen at home you won’t be able to benefit.

The front-facing camera has been improved too – going from 1.2Mp to 5Mp. And it uses the screen as a flash – these improvments make for better lit and more detailed shots – good if you’re a selfie lover.

Super-speedy – Each and every iteration of the iPhone gets a new processor which is faster than the old version. The 6s is no different and is  fitted with what’s set to be a lightening fast A9 processor. We have no doubt that it’ll blitz through our speed tests and will be able to handle even the most complex of apps. But the iPhone 6 was already more than quick enough and it’s unlikely that you’ll actually notice the difference between the two in daily use.

Backward steps – One thing that Apple isn’t so keen to mention is the slightly thicker body and lower capacity battery on the 6s. These sacrifices have been made in order to squeeze in the new pressure sensitive screen. According to Apple’s promo video, the battery capacity has gone down from 1810mAh on the iPhone 6 to 1715mAh on the iPhone 6s. Apple still claims that it has all-day battery life – something we’re currently putting to the test in our lab.

The iPhone 6s is certainly an impressive phone and we have high hopes for it in our tests. But whether you should upgrade or not depends on what phone you currently have. If you’re new to Apple and want a premium phone then it’s a fantastic option. Similarly, if you have an iPhone 5s or older it is worth upgrading as the difference will be noticeable. But for those with the iPhone 6 we think it’s best to wait until 2016’s iPhone simply because there’s not enough of a tangible difference between the two to warrant the upgrade. We’ll have full test results for the iPhone 6s soon – so check back to see exactly how it scored in our tests.