Engines are more efficient than ever, but in most cases our cars still cost us much more to run than the manufacturers’ official mpg figures suggest.

Our independent fuel-economy testing of petrol-engined cars shows that some miss their claimed mpg figure for the combined cycle by more than 30% – with the BMW 4 Series Gran Coupé topping our chart at 33%. That could mean spending hundreds of pounds more on petrol each year if you assumed the official figures were indicative of the mpg you’d achieve.

Below, we’ve listed the 10 cars that stray furthest from their fuel-economy claims, including popular models from Alfa Romeo, Peugeot, Hyundai and Citroën.

EU law requires carmakers to show official test figures in their adverts to help consumers compare fuel economy between different models. But we think the figures should also reflect real-world driving, and if a brand quotes an mpg figure in its adverts, a consumer should be able to achieve it in normal use – or at least get close to it.

In 2013/14 we assessed 200 cars in our lab and road tests, putting all models through the same fuel economy evaluation. Here we list the petrol engine cars we’ve tested that miss their claimed combined cycle mpg figure by the most. 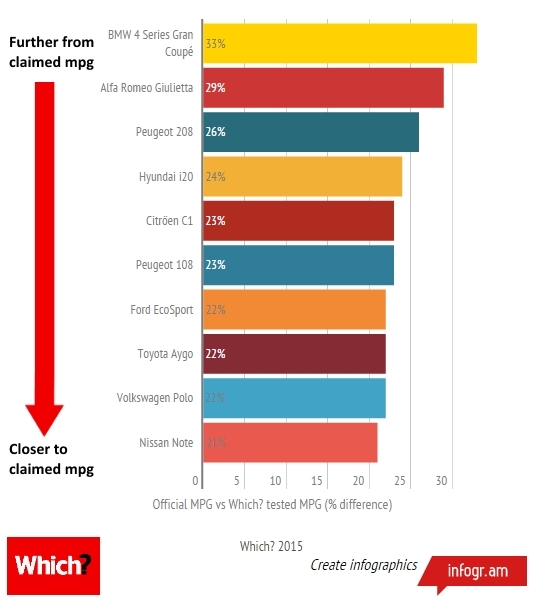