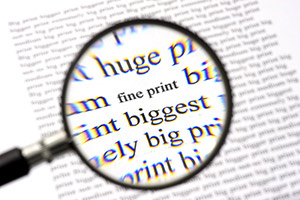 Insurance policies are still far too long and difficult to understand, according to Which? research.

Which? Money has analysed 40 car, home and travel insurance documents to see which providers make it difficult for people to understand what they’re buying and which ones don’t.

Most of us will scan through the main points of a complicated insurance policy without reading every word. This leaves policyholders open to missing important, less-known conditions and exclusions that could lead to a claim being rejected.

We looked at the policy documents of the 16 biggest car, home and travel insurers and found that these often stretched to more than 50 pages.

Some travel insurance policies, including ones from Admiral, Direct Line, and More Than, contain more than 32,000 words – longer than George Orwell’s Animal Farm or John Steinbeck’s Of Mice and Men.

The longest travel terms we saw are from Admiral and run to 38,248 words, which would take the average person two hours and 15 minutes to read.

In June, the Financial Conduct Authority urged companies to simplify their policy documents, but it’s clear many of them still have a long way to go.

The Plain English Campaign recommended that sentences should be kept to around 15 to 20 words on average to make them easier to understand. However, we found some sentences within insurance booklets way exceeding this.

Which? executive director, Richard Lloyd said: ‘It’s absurd that consumers are expected to tackle such lengthy terms and conditions for everyday insurance products.”

‘The regulator put companies on notice to simplify their policy documents but bad practice is still rife. More has to be done to ensure consumers can easily understand what they’re signing up to so they don’t get stung when they make a claim.’

If you feel that your insurance claim has been turned down because of something in the small print, contact your insurer to give them the chance to put it right before lodging a complaint. If you’re still unhappy, put in a formal complaint. The insurer must deal with it within eight weeks. If it still hasn’t been resolved, take the complaint to the Financial Ombudsman Service.

Metro Bank launches pet insurance – is it any good?

The future of cash: seven things we learned from the Which? Cash Summit