Seven in 10 people (69%) end up compromising when buying a house, but there are some things that homebuyers simply won’t budge on.

In our June 2015 home-moving survey, we asked 1,711 members of the public who’d bought a property in the last five years what they compromised on when buying their home.

Overall, seven in 10 (69%) did compromise on at least one aspect of the property they bought. However, people living in London and the south were much more likely to do so than those living in Scotland (79%, 74% and 59% respectively). 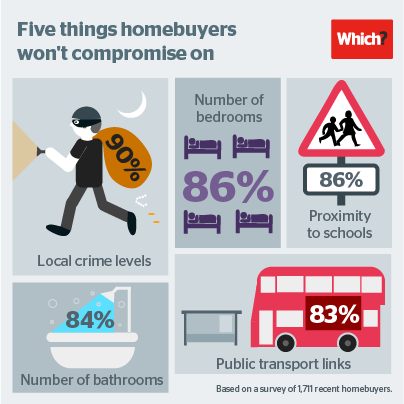 The most common factor our survey respondents compromised on was the overall condition of the property, with three in 10 buyers (29%) having been flexible on this.

And despite the high proportion of people making some form of compromise, most people ended up happy in the end: nine in 10 (89%) were satisfied with the compromises they’d made and only 3% were dissatisfied.

Older buyers were slightly happier with their decisions, with 92% of over-65s satisfied compared to 87% of 18-34 year olds.

And in terms of the gender divide, while women were more willing to budge on aspects of their property than men (72% compared to 65%), men ended up slightly more satisfied with the compromises they’d made (91% compared to 88%).

How to make buying a house easier

Moving house is notoriously stressful, but there are steps you can take to make things go more smoothly.

Researching the area you’re interested in before you begin your search will ensure that you have a clear idea of the kind of properties that are realistic for your budget. Our guide to researching the local property market will help with this.

Having good relationships with everyone in the process, including estate agents and solicitors, can make a huge difference – as can being as organised as humanly possible. Having your paperwork ready in advance, and signing and returning forms as soon as you receive them, will help speed things up.

Our top 10 tips for viewing a property will also help you to focus on the most important things to check and ask when looking around your potential future home.