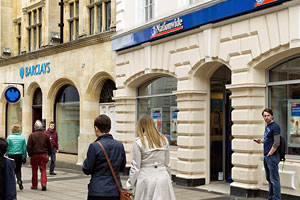 The proposals to improve competition in the current account market outlined by the Competition and Markets Authority don’t go far enough, according to Which?.

In a report published today, the CMA suggested many consumers worry that switching banks is too complicated, time-consuming and risky.

A number of potential remedies were outlined by the watchdog, including a suggestion that banks should prompt customers to review their service after key changes to their account.

Responding to the suggestions, Which? executive director, Richard Lloyd, said: ‘The CMA inquiry has to bring about better banking, but these proposals don’t go far enough.

‘The CMA’s own evidence is that consumers are disengaged from the banking market, so better information and nudges to switch will not be enough.’

The report suggested consumers could save an average of £70 a year by switching their current account, while heavy overdraft users could save up to £260.

Despite this, it was found that 57% of consumers have been with their account provider for more than 10 years, while 37% had gone more than 20 years without switching.

A seven-day current account switching service was launched in 2013 to take the hassle out of moving banks, while the government’s bank account comparison tool Midata went live earlier this year.

Still, only 3% of customers switched their personal current account in 2014 and just 16% looked at alternative accounts, according to the CMA.

Which? calls for radical methods to promote switching bank account

Which? is calling for more creative solutions to spur banks into genuinely competing and improving the way they treat all customers in three key areas.

The CMA should look at forcing banks to be more proactive at helping customers who regularly use an unauthorised overdraft, as well as increasing compensation levels for customers who experience poor service.

The CMA should explore how to make more use of information about the behaviour of banks to regularly name and shame the worst providers.

The CMA should consider how banks can put people in control of their overdrafts, for example by notifying customers about hitting their current account limits before they go into the red.

From gifted deposits to guarantor mortgages: how to help your child buy a home in 2020