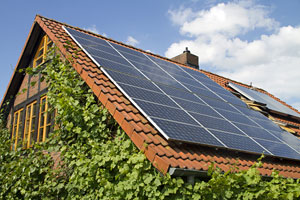 Autumn may not strike you as the best time to buy solar panels, but there are three good reasons as to why now is the time to buy if you have been hesitating.

Firstly, the cost of solar photovoltaic systems is the lowest it has ever been.

Secondly, an EU ruling means there is the threat of a 15% rise in VAT on solar panels, which will push up prices.

Thirdly, come 1 January, there’s likely to be a major drop in the feed-in tariff – this gives home owners cash in return for generating their own electricity.

Find out which solar panels you should buy – we reveal the best solar panel brands.

Cost of solar panels coming down

Solar photovoltaic panels are not cheap. However, if you take advantage of the current feed-in tariff (FiT) rates, a solar PV system will pay for itself in about 12 to 13 years. The payments are guaranteed for 20 years.

Back in 2012, when solar panels were at their most expensive, the FiT rate was at its highest (43.3p/kWh). But while the FiT rate has dropped since then, so has the cost of a solar PV system – as you can see from the image, below: 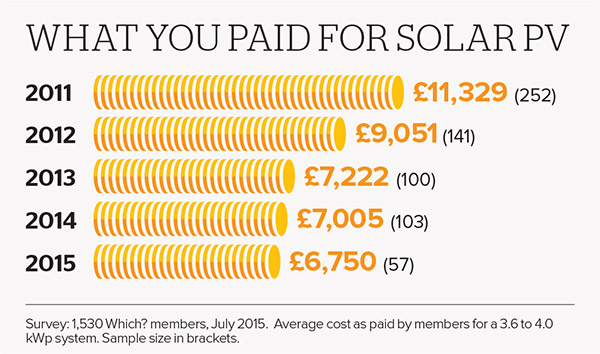 So the drop in the FiT rate has been cushioned by the fall in the cost of buying a solar panel system. But this is about to change…

The government is now consulting on dramatically dropping the FiT rate from 1 January. If the proposal goes ahead in its current form, the generation tariff would drop from 12.47p/kWh to 1.63p/kWh – a massive 87% decrease.

As a result, it will make buying solar panels less interesting as an investment. This is because it would take a lot longer for the upfront cost to be paid back with FiT and the savings on electricity bills.

(We assumed a house in the Birmingham area with minimal shading, a 30 degrees roof incline, facing direct south and with an EPC of band D of higher. We assume no inflation or change in electricity price for simplification of illustration purposes.)

If you already receive FiT or sign-up before the 1 January, you won’t be affected by the drop – FiT rates are guaranteed for 20 years from the day of registration. But in order to secure the current generation rate of 12.47p/kWh, your solar PV system and installer both need to be MCS certified and your FiT application would have had to be received by Ofgem well before 31 December 2015.

The government is studying the judgement and considering its next steps. It is looking at whether it could find a loophole to avoid the VAT rise. The government ruled out an increase in VAT as part of its manifesto pledge.

Any change as a result of the ruling wouldn’t affect anyone who had already pre-ordered or prepaid for their solar panels.

So if you were considering getting solar panels for your house, we would recommend you act now. Even if the government finds a way not to have to increase VAT and the decrease in FiT isn’t as dramatic as the proposed 87%, it is extremely unlikely that FiT would go up and VAT would decrease in the future.