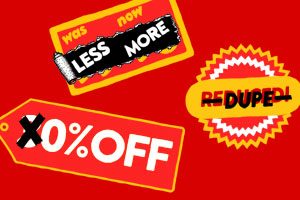 The government has announced plans to look into ways supermarket price comparisons can be simplified for shoppers following a Which? super-complaint.

Which? made the super-complaint to the Competition and Markets Authority (CMA) in April 2015. The resulting investigation from the CMA found examples of promotional practices that could mislead consumers. These included supermarkets running ‘was/now’ promotions where the discounted price is advertised longer than the higher price. The CMA also uncovered what could be hundreds of promotions a day on the supermarket shelves in breach of consumer law.

The government has now responded to the CMA report, laying out plans to develop best practice guidelines for pricing information. A particular area of concern is the use of inconsistent unit prices which make comparison difficult or impossible.

Consumer Minister Nick Boles said: ‘Shoppers need to be able to get the best deal and make comparisons easily so we will look at how we can make information on price as clear and as simple as possible. The government takes the Competition and Market Authority’s findings and recommendations seriously and it is important that the supermarkets do too.’

Responding to the announcement, Which? executive director, Richard Lloyd, said: ‘It’s good to see the government supporting our super-complaint and committing to end the confusion around supermarket pricing by strengthening the rules. These changes now need to be implemented without delay to ensure consumers are no longer subjected to misleading pricing practices. Cracking down on dodgy offers will be good for consumers and competition.’

Which? super-complaint on misleading pricing

After repeatedly exposing misleading pricing practices in the grocery sector, Which? deployed one of its most powerful legal weapons – a super-complaint – to demand action from the CMA. The CMA is an independent authority responsible for overseeing competition and consumer law.

Misleading practices investigated by Which? include supermarkets running ‘was/now’ pricing promotions, where the discount price is advertised for longer than the higher price and the downsizing of products without a corresponding change in price.

Which? is one of a small number of consumer organisations with the legal powers to formally raise matters that may be significantly harming consumers’ interests with regulators, in the form of a super-complaint. It’s a power we only use after exhausting every other possible route to change businesses’ practices. More than 200,000 people have supported our super-complaint – add your voice to our campaign to put an end to misleading pricing.