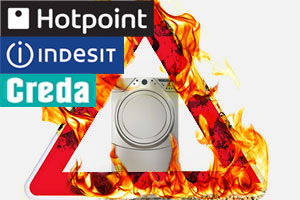 Indesit has issued a safety alert for a potentially ‘significant’ number of its tumble dryers after a fault was discovered which could expose the dryers to a fire risk when excess fluff touches the heating element.

The fire risk affects certain large vented and condensing tumble dryers, which were sold under the brand names Hotpoint, Indesit and Creda in the UK and abroad between April 2004 and October 2015.

There are several million Hotpoint, Indesit and Creda appliances in UK households and it’s expected a ‘large number of them [are] affected.’

STORY UPDATED 11/12/15 – We’ve investigated and uncovered the names of the affected tumble dryer models. Find out if your tumble dryer is on the list.

STORY UPDATED 11/2/16 – Get the latest news on the tumble dryer fire alert.

If you are considering replacing your appliance, check to see which models have earned our recommendation as Best Buy tumble dryers.

Customers with affected models will be offered free repairs at home, and will be contacted by Indesit to arrange this.

In the meantime, Hotpoint suggests that the dryers can be used, but should not be left unattended while running, and the lint filter should be cleaned after each use as manufacturers recommend.

Our 2013 investigation into appliance fires revealed that there were more tumble dryers recorded for Hotpoint than other manufacturers.

We felt that the figures were higher than you might expect, but at the time were unable to confirm whether this was down to the brand’s larger market share.

A more recent Which? investigation has found that nearly 12,000 fires were caused by faulty home products between 2011 and March 2014, and that it’s possible that some brands are more prone to catching fire than others.

Hotpoint is one of the largest appliance brands, so we would expect it to account for a higher number of appliance fires than others.

At the time, Hotpoint told us that they did not believe the government data on appliance fires we analysed to be robust.

As well as cleaning the lint filter after each use, you should also try to avoid overheating your tumble dryer by overloading it.

This includes putting in overly large items such as duvets and blankets, as there won’t be enough space for air to circulate: this can overheat the dryer, too.