The YouView guide launches on selected Sony smart TVs, bringing together live TV viewing and catch up on apps such as ITV Player and All 4.

You may know YouView from set-top boxes and PVRs, but it has now made the big leap onto TVs, starting as a free update on selected Sony models.

Not only does it bring an advanced TV guide blending live viewing and catch up, it also introduces ITV Player and All 4 to Sony televisions for the first time. Let’s take a look at the key features of YouView on Sony TVs.

TV reviews – browse models from Sony and other leading brands

TV guide – The core YouView EPG (electronic programme guide) looks largely the same on Sony TVs as on YouView boxes. You can browse what’s available to watch across Freeview channels up to seven days ahead, and sort the channel list into your preferred order. Switch to the one-channel mini-guide and you can continue watching the full TV picture while browsing what else is on. You can’t set PVR recordings using Youview, although Sony says this could be added at a later date.

Catch up TV – As well as seeing what’s coming up to watch, you can also go scroll back through the last seven days of TV with YouView using feeds from BBC iPlayer, ITV Player, All 4 and Demand 5 to create a seamless catch up TV experience. In the demo we saw, the Sony TV smoothly launched programmes with hardly any lag or buffering, while if you’d prefer to jump straight to iPlayer or any other of the services mentioned, you can do via the relevant app. 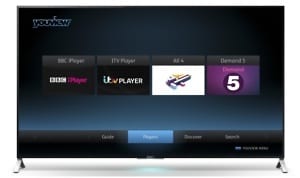 Filter and search – You can filter all the YouView catch-up content via categories such as ‘children’s’ or ‘factual’, or search for a specific programme or term. YouView goes one step further with its Discovery feature, which brings together all the most popular on-demand content at any given moment so you can see if anything takes your fancy. It also presents all the most recently added content so you can quickly see the latest shows.

Availability – YouView is available now as a free update on all 2015-released Sony TVs with Android-based smart features – this runs from the W756 range and upwards. Head to our TV reviews to see if any of these are Best Buys. Unfortunately, YouView won’t be made available on older Sony TVs.

More than two million YouView devices have been connected to the internet since the service launched over three years ago. However, I have always felt that YouView could do more by thinking outside the box – the set-top box, that is.

By making the move onto TVs, starting with Sony, but possibly expanding to other brands in future, YouView might yet become the universal TV guide I always thought it could be – it certainly seems promising from my time with it so far.

It’s worth noting that YouView is not alone in this venture, however. Freesat’s Freetime service already offers this sort of functionality on Panasonic TVs, while the new Freeview Play guide has recently launched.
Andrew Laughlin – Which? TVs expert

Best deals in the October sales revealed by Which?