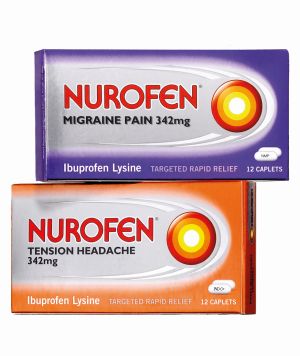 Nurofen manufacturer Reckitt Beckiser has been found to have engaged in ‘misleading or deceptive conduct’ by the Australian Federal Court, for selling identical painkillers in the guises of four different products in Australia.

Nurofen Back Pain, Nurofen Period Pain, Nurofen Migraine Pain and Nurofen Tension Headache all contain the same active ingredient in Australia – ibuprofen lysine 342mg – and work in an identical way, despite the packaging claiming that the drugs could target specific types of pain.

Here in the UK, the Nurofen products you’ll see on shop shelves aren’t exactly the same as in Australia, but the issue is the same.

You might think that Nurofen Migraine Headache and Nurofen Tension caplets would target your migraine and tension headaches respectively, but you’d be wrong: ibuprofen can’t target pain in specific body parts.

These products (Nurofen Migraine and Tension Headache, pictured right) are exactly the same as each other and as Nurofen Express caplets, which were available until recently.

Each product contains 342mg of fast-acting ibuprofen lysine, which is equivalent to 200mg ordinary ibuprofen.

One Which? pain expert says: ‘It’s a waste of money to buy so-called targeted painkillers, and potentially dangerous as you might be misled into taking a double dose for two main pain types [thinking they’re different medicines].’ Nurofen defends the sale of targeted painkillers, saying that they can help consumers choose the right one.

Which? members can read our full investigation into the truth about painkillers in the January 2016 issue of Which? magazine, which is out later this week. If you’re not already a Which? subscriber, you can sign up for a £1 trial to Which? to get full access to our website and receive Which? magazine direct to your door each month.

Which? editor Richard Headland said: ‘Our research shows many painkilling medicines have exactly the same active ingredients, despite vastly different marketing, packaging and pricing. Our advice to people is to buy cheaper generic medicines wherever possible and, if in doubt, ask a pharmacist.’

Shopping around can also pay dividends, as well as carefully reading the packaging. Most leading pharmacies and supermarkets also sell generic versions of fast-acting ibuprofen, which costs as little as a third of the cost per tablet of Nurofen.

They’re not identical to the Nurofen tablets – even though the active ingredients are the same (342mg ibuprofen lysine) – but they’re often identical to each other despite the brand, packaging claims and prices.

In our latest investigation, we uncovered 14 products that are all identical to each other, ranging from 8p a tablet at Wilko to 20p per tablet at Boots and Superdrug. They are variously sold as ‘migraine relief’, ‘period pain relief’, ‘express pain relief’ and ‘rapid pain relief, but are made at the same production site (laboratories) to exactly the same formulation.

If you examine the fine print, you’ll find all these products carry the same marketing authorisation (product licence/PL) number. This means they are the same, but the licence allows it to be sold under different names.