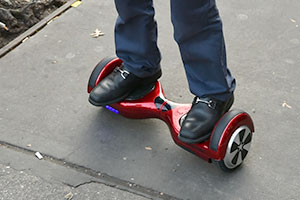 National Trading Standards (NTS) is warning that thousands of this Christmas’s ‘must-have’ self-balancing scooters are counterfeit and pose a significant fire hazard.

Around 15,000 of the 17,000 self-balancing scooter examined since October have been detained by NTS, mainly for having non-compliant electrical components that could explode or catch fire.

One self-balancing scooter – modelled on the hoverboards from cult 80’s film Back to the Future 2 – caught alight while charging, causing some £25,000 worth of damage to the owner’s kitchen.

It’s suspected that most of these products are being imported for onward sale as Christmas approaches.

We’ve created a guide on what you should do if you’ve found what you suspect to be fake or counterfeit goods.

Many of the boards were found to have non-compliant plugs without fuses, which increase the risk of the device overheating, exploding or catching fire, and cut-off switches that failed when tested.

Many of the seized items carried apparently fake CE marks, and NTS has advised that ‘unfortunately consumers cannot rely on the CE mark as an indication that a hoverboard is safe’.

NTS has reported a huge spike in the number of hoverboards arriving into the UK in recent weeks, destined to end up as Christmas gifts, with additional staff being trained to carry out testing.

The NTS eCrime Team has warned of a huge increase in the variety of fake and counterfeit goods being sold by unscrupulous sellers on social media.

And according to the latest Intellectual Property Crime Report, social media has overtaken auction sites as the criminal ‘channel of choice’ for counterfeit and piracy activity.

Last month, Kent Trading Standards warned about dangerous replicas of hoverboards selling for hundreds of pounds cheaper than the normal price of £300 to £600 on auction sites and social media accounts.

Consumers should check that the three pin plug on the device states it is made to BS 1363 and avoid buying it if this information is missing.

How to identify an unsafe hoverboard