No, your eyes aren’t deceiving you, that’s still Virgin Media’s venerable Tivo box in the picture – a device the brand has been installing around the UK since late 2010. That’s an eternity for a set-top box, and now arch-rival Sky has announced its Sky Q box, which will make Tivo look even more old-fashioned.

Thankfully, it looks like Virgin may at last have a replacement waiting in the wings – or at least in the final stages of development. Why do we say that? Well, we’d be very surprised if the TV provider didn’t have a new box on the way – it has to stay competitive, after all – but also because it has been sending out surveys to customers asking them what they want the next Virgin Media TV box to do, and it’s pretty specific.

Virgin Media box – what the survey tells us

Taking a look at the questions asked on Virgin Media’s survey paints a picture of how the company is thinking ahead of its TV box refresh.

For example, customers are asked whether they’d like to be able to watch their recordings on a tablet and whether the option to download recordings to watch on mobile devices offline is of interest.

Other questions allude to ‘30 day cloud storage’ – something that would allow users to stream TV from the last 30 days, regardless of channel, directly from the cloud. There’s also mention of 4K / Ultra HD compatibility and the inclusion of as many as six tuners, so that users can record up to five shows while watching a sixth.

The slide below is taken directly from the survey and shows the extent of the proposed upgrades compared to Virgin’s existing Tivo box: 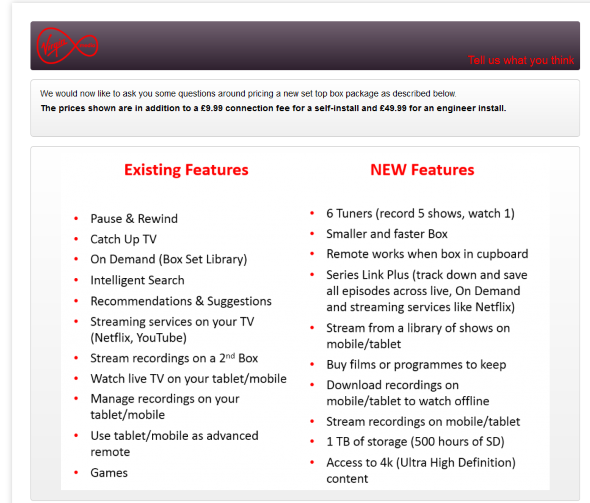 Will I have to pay any extra?

Though no concrete pricing details were revealed in Virgin Media’s survey, there were questions posed around how much existing customers would be willing to pay on top of their existing bundle.

Options included a one-off fee of anything from £30-£200, or a combination of a one-off fee with an increased monthly subscription cost. A £50 one-off fee and £3 monthly increase was just one example of a range of suggested price increases.

Interestingly, not one question asked customers whether the new box should be a free upgrade, suggesting that some kind of extra fee is inevitable.

How does Sky Q compare?

Tellingly, Virgin’s survey ends by asking participants whether they’ve heard of Sky Q – Sky’s brand new TV box set for a 2016 release. Perhaps then it’s no coincidence that much of Virgin’s survey – from 4K and tablet streaming, to offline viewing and smarter catch up TV services – has a lot in common with the specifications of the Sky Q box.

We’ll post our comprehensive review of Sky Q, and whatever Virgin’s next TV box turns out to be, just as soon as they’re available.

Of course, if you’re already a Virgin Media or Sky customer, we’d be interested in your views on these speculative specs and whether you’d be willing to pay extra to get them – with so many high-quality, inexpensive internet TV boxes and PVRs now on the market, plus smart TVs with built-in streaming, the competition is stiffer than ever. Let us know in the comments below.