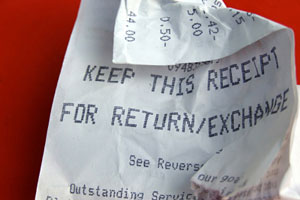 Which? has helped more than 1,000 people try for a refund, repair or replacement for faulty items worth up to £1,188,073 over the Christmas period.

The claims made using our new faulty goods tool have an average price of a product claimed of £213.

Claims have ranged from £4.99 for a faulty nutritional supplement shaker, right up to £58,000 for an unsatisfactory static caravan.

You can lodge a claim to get a refund, repair or replacement using the Which? faulty goods tool which will provide you with a ready-to-go letter to sign and send off to the retailer

You have rights and can demand a refund

Which? director of campaigns and communications Alex Neill said: ‘It’s always disappointing to receive something that is faulty and it can be confusing to know what you need to do next.

‘It’s important for people to remember that they have rights and can demand a full refund within 30 days of purchase.’

In separate research conducted with more than 2,000 people earlier this month, Which? found that the top reason for consumers making returns was faulty goods. One in five people claimed a refund, returned or exchanged a product in the last year for being faulty.

When it comes to consumers returning faulty goods more than half doing so last year were returning electrical items like mobile phones, laptops or dishwashers, followed by clothing and shoes.

It’s worth noting that shops aren’t required by law to have a returns policy, but if they do have one they must stick to it.

This is good news for almost three in 10 of those who returned a product to the high street as they said that there was nothing wrong with it; they just decided they didn’t want it. The same proportion had also made a return because they’d ordered the incorrect product or size.

Those who returned products for reasons other than being faulty were most likely to find out about the returns policy by checking the receipt or looking it up online.