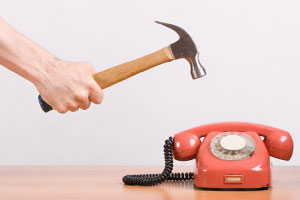 A lead generation firm responsible for more than 46 million nuisance calls has been fined £350,000 – the regulator’s largest ever fine.

Brighton-based Prodial Ltd was operating out of a residential property and also hiding its identity, which made it harder for people to report the calls.

Despite this, their unscrupulous cold-call tactics generated more than 1,000 complaints to the Information Commissioner’s Office (ICO).

The company, which was behind millions of automated calls that played recorded messages relating to PPI claims, has now been placed into liquidation.

Many complainants who reported Prodial Ltd said they were called repeatedly and often there was no opt-out option.

One in seven said they were left feeling helpless that they could do nothing to stop the calls which were extremely intrusive and at all times of day and night.

Companies can use internet phone lines to cheaply make huge numbers of recorded marketing calls. The law is clear that firms can only make calls to people who have consented to being contacted in this way.

But the ICO investigation found Prodial had no such consent. Evidence from the investigation showed the information from these calls was used to sell people’s personal details on to claims-management companies.

Records indicated the cold-call ‘marketing campaign’ could have produced a turnover of nearly £1 million. Despite the sums of money involved, the company has been placed into voluntary liquidation by one of its directors.

Which? executive director Richard Lloyd said: ‘millions of people are bombarded with nuisance calls, so it’s good to see the ICO issuing ever larger fines to tackle this everyday menace.

He added: ‘we now need to see the government introduce tougher penalties for senior executives of companies making unlawful calls, including ensuring that board directors are held personally accountable.’

Information Commissioner Christopher Graham said: ‘This is one of the worst cases of cold calling we have ever come across. The volume of calls made in just a few months was staggering.

‘This was a company that knew it was breaking the law. A company director admitted that once the ICO became involved, the company was shut down.’

The ICO’s enforcement team is currently working with the liquidators to recover the fine.