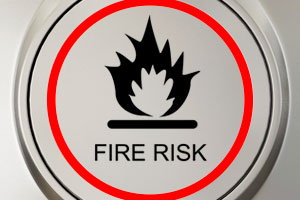 Tumble dryer fire risk: The maker of Hotpoint, Indesit and Creda dryers is still advising owners to use fire-risk dryers.

The maker of Hotpoint, Indesit and Creda fire-risk tumble dryers is still advising owners to keep using them, despite new reports of house fires being caused by dangerous dryers.

12 weeks on from issuing a safety-alert the advice from the manufacturer Whirlpool remains the same for worried owners – continue to use your dryers while waiting for them to be serviced, as long as you take some basic precautions. Which? has previously revealed that at least 113 models of tumble dryer made between April 2004 and October 2015 are affected.

Following the latest reported house fire in Guildford, we asked Whirlpool whether it is sticking to the safety advice issued in November 2015 – when news of the safety-alert first broke – or whether it had updated this, following further reports of dryer fires.

But there’s been no change of advice from Whirlpool. It told us that affected dryers are safe to use as long as users clean the lint filter after every use, ensure proper venting and don’t leave their dryers on when out of the house or asleep.

However, with dangerous Hotpoint, Indesit and Creda dryers accounting for more than 750 fires since 2004, our advice for owners of affected models is to not use your dryer until it’s been modified.

The problem with Hotpoint, Indesit and Creda tumble dryers

Whirlpool revealed there was a fault in November 2015, that meant that more than one hundred models of Hotpoint, Indesit and Creda tumble dryers could catch fire, if fluff came into contact with the heating element.

Since then it’s been revealed that hundreds of fires featuring affected dryers have been reported since 2004 with at least three people being injured as a result. Whirlpool dryers are not part of the safety-alert.

Is your tumble dryer dangerous?

Look for a green dot sticker inside the dryer either on the door itself or on the rim. If there’s no dot here, look on the back panel. If you find a green dot, your dryer will not be affected.

If you don’t find the green dot, go the Hotpoint or Indesit websites (safety.hotpoint.eu and safety.indesit.eu) to register for it to be serviced and modified. You can also call 0800 151 0905. Creda dryers can be checked on the Hotpoint site.

Whirlpool tells us it’s recruited 350 extra call centre staff, as well as 350 engineers to carry out the modifications needed to make its dryers safe. It tells us it’s sent out 3.4 million letters to owners of affected dryers and that it’s resolved 114,000 cases since November 2015.