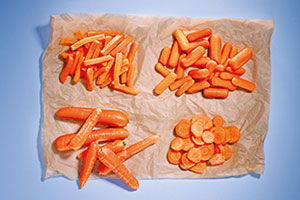 Shoppers are being charged more than twice as much for some pre-sliced or pre-portioned foods over the unprepared versions, according to a new Which? investigation.

We assessed the typical price per kg or litre that most people are likely to pay for different versions and sizes of foods across Asda, Morrisons, Sainsbury’s and Tesco. We looked at a range of everyday essentials, from the vegetables for a stir fry to the milk you slosh over your morning muesli.

The results confirm what many of us have long suspected: conveniently pre-sliced or pre-portioned foods attract a premium over the standard version.

The full investigation ‘Food: the true cost of convenience’ appears in the April 2016 issue of Which? magazine. If you’re not yet a subscriber, you can get instant access by taking a trial to Which?.

Our analysis shows that you could end up paying twice as much for sliced carrots (£1.49/kg) over whole carrots (60p), and almost three times as much for carrot batons (£1.85). And bags of mini carrots (£3.13 per kg) can cost five times more than the whole version.

Broccoli florets (£4.69/kg) are more than three times the cost of a whole head of broccoli (£1.49). And you could be paying an extra £1 per kg just for the convenience of having pre-sliced mushrooms (£4/kg).

Chopped and peeled vegetables tend to have a shorter shelf life, so whole fresh vegetables are a better option all round.

Price premiums extend further than the fruit and veg aisle. In the bakery section you’ll pay slightly more for a smaller or half loaf of bread (£2/kg), but in many cases the smaller packs don’t cost too much more than an 800g loaf (£1.81), gram for gram.

But if you need a gluten-free loaf, you’ll find the price ramps up significantly; the loaves we assessed were £5.61/kg on average.

Buying larger bottles of milk is the best option for larger households, as one pint (79p/litre) can cost nearly twice as much per litre than a four-pint bottle (44p). The price per litre doesn’t vary greatly between a six-pint (43p) and a four-pint bottle.

Those of you who choose dairy-free alternatives, such as lactose-free milk (£1.35/litre), soya (£1.40/litre) and almond drinks (£1.77/litre), have told us that you tend to stock up when products are on special offer, which is hardly surprising when you consider they can cost twice as much per litre than regular milk.

Our monthly supermarket price comparison reveals which is the cheapest supermarket for a basket of branded groceries.

It’s not always easy to compare costs in the supermarket, especially if complicated mental arithmetic is required just to compare the same product presented in various packet sizes and styles.

We want supermarkets to make it easier for you to compare prices by improving unit pricing. The Competition and Markets Authority supported our 2015 super complaint on misleading pricing practices, as did the UK government, which we expect to consult soon on changes.

In the meantime, keep an eye on the unit prices of food in supermarkets to make sure you’re getting a good deal.