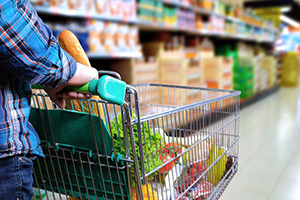 Asda was cheapest for our shopping basket in March

After a surprise result last month, with Morrisons coming out on top, Asda re-established the status quo in March and was once again the cheapest supermarket.

You can find out which supermarket was the most expensive, and what Morrisons, Ocado, Sainsbury’s, Tesco and Waitrose charged this month.

Click to check out our full supermarket prices compared results.

Sainsbury’s has agreed a deal to buy Argos for £1.4bn, with plans to move some Argos stores into Sainsbury’s supermarkets. The results of our best and worst high street shops survey reveals what shoppers think of Argos shops.

Morrisons, meanwhile, had some positive news. It revealed a pre-tax profit of £217 million, after a £792 million loss in the previous year. The chain had sold off a series of unprofitable stores and it’s teamed up with Amazon to sell fresh groceries through the online giant’s website.

However, is this return to profitability reflected in what Morrisons’ customers think of it? We survey thousands of supermarket shoppers to find out what they think about their supermarket, asking about everything from trolleys to prices. Discover how Morrisons scores by visiting the best and worst supermarkets.

Many supermarkets have a price matching scheme, so they will compare their prices against other supermarkets. They will often give you a voucher for the difference, if your shopping would have been cheaper elsewhere.

Tesco has changed its price comparison scheme and now deducts money at the till or as you pay the bill online, so should charge the same as Asda for our basket. However, you need to buy at least ten items to qualify for the scheme.

As the schemes vary, we’ve rounded up the differences below. Click the links to find out what the supermarkets’ customers think of them, and to find out if they have any own-brand Best Buys:

Every month, we look at the prices of between 70 and 100 products. This includes a range of everyday items, from bread to fruit juice, and varies from month to month.