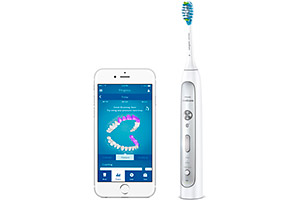 Philips has announced the launch of a smart electric toothbrush that can record your brushstrokes, show the areas you over-brush and highlight those you completely miss out on cleaning.

The smart Philips Sonicare Flexcare Platinum Connected records where the brush is in your mouth and the speed and force of your brushing. This data is then sent to an app via Bluetooth, which allows you to see the effect of your brushing in real time as you brush.

Philips claims this new smart toothbrush will be able to map your mouth, measuring the direction and the angle of the brush. It also says it has sensors which measure exactly how hard you’re brushing your teeth.

Where the Philips Sonicare Flexcare Platinum Connected differs is that the app includes a detailed visual representation of your mouth, so you can see which teeth are in need of more attention.

The new Oral B Genius 9000 has a similar feature – one of our researchers is currently trying out this smart electric toothbrush, and we’ll be offering our first look review of it on Which.co.uk shortly.

The Sonicare Flexcare Platinum Connected electric toothbrush will be launched in the UK in September 2016 and is likely to be available for around £250.

During our last round of testing, we took more than 2,000 plaque readings to reach our conclusions about the electric toothbrushes we reviewed.

We also check to see how it feels to use the brushes, with each trialist rating the brushes for comfort.

We record how many two-minute brushes a fully-charged battery offers and, to replicate real-life use, we leave a 12-hour interval between brushes. And we weight the end of the brush to mimic the pressure used when actually brushing your teeth.

Which? tests have revealed noticeable differences between brushes when it comes to how quickly they can be recharged – some models are recharged and ready for action after just 12 hours while others take nearly two days to fully power-up.