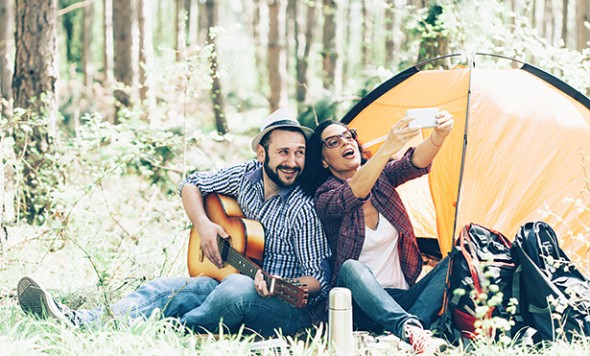 We look at some of the devices that can give your phone battery a boost when there’s no mains access, including battery packs, battery cases and solar chargers.

No running water or electricity. Not even a proper toilet. Just you in a muddy field, and a piece of tarpaulin with a few tent poles shoved through it. But with summer upon us, whether it’s the lure of a festival or just the great outdoors, many decide that now is the time to go camping.

In these situations, your smartphone becomes your only connection to the civilised world. But as the battery percentage creeps down to single figures, you can feel that slowly slipping away – soon you’ll have to acknowledge the harsh realities of life in a tent: a damp sleeping bag and a line of ants marching into your half-eaten bag of Haribo.

But you don’t need a mains socket to give your phone that much-needed extra juice. Battery cases, battery packs and solar chargers all allow you to boost your battery without one. We’ve picked a couple of each to find out which type is best for different situations.

Often the cheapest option for boosting battery, battery packs tend to be simple plastic blocks that connect to your phone via a USB cable. They’re great if you find yourself a bit short of battery and in need of a quick boost.

But their charge is finite – able to deliver one or two full charges depending on the size of the battery. And, unlike battery cases, it’s awkward to continue to use your phone while they work their magic. 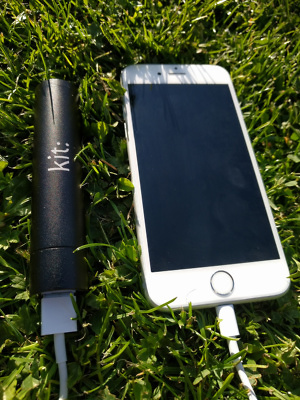 Kit: Power Bank (£15) – No thicker than a tube of lipstick, the first thing you’ll notice about the Kit is the compact size. The cylindrical shape is more convenient than the block design that many others have. It feels solid, too. The metal casing is more durable than most, able to handle the bumps and bruises that it will likely endure.

Your normal USB charger plugs directly into the end of the tube and the 2000mAh battery is enough for just one full charge. But it delivers that charge relatively quickly – it boosted an iPhone 6s battery by 50% in an hour. 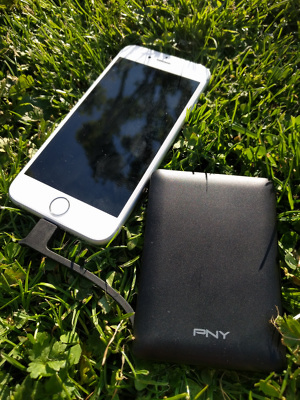 PNY Powerpack LM3000 (£15) – This battery pack is a little larger than a credit card and boasts a bigger 3000mAh battery than the Kit. This is enough to deliver up to two full charges, boosting an iPhone 6s by 45% in an hour.

The included Apple lightning connector and micro USB connector are both a blessing and a curse. On the one hand, it negates the need for any extra cables and means you can charge both an iPhone and an Android phone at the same time. But if your phone uses one of the new USB-C connections, you won’t be able to use this battery pack at all.

Our verdict on battery packs – A handy thing to have in your handbag or backpack, they can be lifesavers if you find yourself in need of a quick power boost. But if you’re going away for more than a few days, be wary that they won’t last forever.

Battery cases include additional power within a skin for your phone. That means some extra heft on your phone but there’s no need to carry round two separate devices. This convenience comes at a price, though – they tend to be relatively expensive. 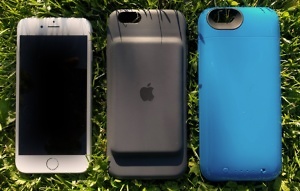 Apple Smart Battery Case (£80) – This battery case could be seen as a tacit admission by Apple that the battery of its iPhones isn’t quite up to scratch. Many iPhone users find their battery languishing in the danger zone at the end of the day, but Apple now has an £80 solution.

Other than the price, everything about the smart battery case is out of character for Apple. It lacks the slick design that is seen across all of its other products. Instead, the humped back is not only ugly but also awkward – it feels unnatural in both hand and pocket.

The 1877mAh battery is smaller than the Mophie (see below). But, similar to its rival, the case charges while you’re charging the phone from your usual iPhone power lead.

While the Apple case is rubberised, the Mophie is made from a hard plastic – it feels relatively durable but is a little slippy in the hand. Rather than sporting a hump, the Mophie is thicker along the full length of the phone. It’s more natural to hold and is easier to get in and out of your pocket. But this comes at the cost of additional bulk.

Our verdict on battery cases – If you find you’re often short of battery from day to day, a battery case can be a quick fix for the problem, while allowing you to continue to use your phone as normal. However, they add significant size and weight to otherwise slim smartphones. Plus, they can be quite pricey.

If you’re outdoors and running out of battery, harnessing the power of the sun seems like the ideal solution. But the same concerns always surround them – will I be waiting for eternity for my phone to charge? We looked at two solar chargers to see how they fared. 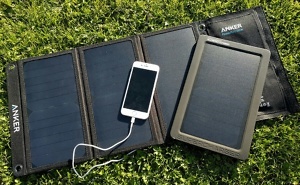 Anker PowerPort Solar (£50) – Claiming to be ‘America’s number one USB charging brand’, solar phone charging would appear to be in good hands. The PowerPort Solar consists of four fold-out parts, three of which house the solar panels. The fourth has a pouch for the USB connection.

There’s no getting round it – it’s big, especially compared to the tiny battery packs. But it needs that size to harvest enough light for charging. That said, it was much slower than the other types of charger, managing to add just 10% of battery after an hour in the sun.

Freeloader Supercharger 5V (£45) – The Freeloader takes on a different guise to the Anker. It’s about the size of one of the PowerPort Solar’s four panels but it has a more rigid body. When the Anker is folded up, there’s not much in it size-wise.

The wire that comes out of the bottom holds the USB port, to which you can attach your normal charging cable. The extra length this gives you could prove useful – for charging your phone in the tent while the solar panel is outside, for example.

The Freeloader struggled more than the Anker in cloudy conditions, failing to harvest enough light to charge at all, but matched it’s rival when the sun was shining. Freeloader says that on ‘a nice sunny day’ it can charge an iPhone in three hours, but we all know they’re pretty few and far between in the UK.

Our verdict on solar chargers – Unless you’re camping on the surface of the sun, you may struggle to get a full charge in a reasonable amount of time. That said, if you’re without a plug socket for long periods – you’re trekking for instance – you can strap both these to a backpack and charge while you walk. Otherwise, we suggest you opt for the more convenient battery pack.