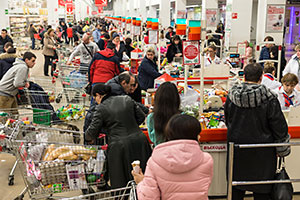 The British have always enjoyed a reputation for forming orderly queues, but that doesn’t mean we relish the time that we spend waiting patiently in line. In fact, our 2016 supermarket customer survey revealed that long queues are your top supermarket bugbear.

To find out more about the art of avoiding long queues, we spoke to businesses, experts and also sent undercover mystery shopping into each of the major supermarkets to find out which of the big four supermarkets is best for getting you through the checkouts quickly.

We sent undercover shoppers into large branches of Asda, Tesco, Morrisons and Sainsbury’s across the country to test the queuing times at 96 standard and self-service tills. We asked our shoppers to buy the same five items and head for the shortest-looking queue.

Which supermarket was best?

The average queuing time for standard checkouts was quickest at Tesco with a speedy 2 minutes 43 seconds, closely followed by Morrisons (2 minutes 47 seconds) and Sainsbury’s (3 minutes 10 seconds). People had the longest average wait at Asda with 4 minutes 52 seconds.

Of course, queue length isn’t the only consideration when choosing where to shop. If you want to know which of the major supermarkets is the cheapest this month, head to our supermarket price comparison.

How to beat the queue

Based on our research, here are our tips for beating the queues when you are out and about.

Give the self-service till a try
Our mystery shoppers found standard cashier queues took longer on average than self-service. The worst of 48 standard queues we tested was one at Asda, which took 12 minutes and 48 seconds.

Pick the left-hand queue
We’re instinctively more likely to join queues on the right, according to some experts, so it may be worth trying a queue on the left.

Look for a single queue
Choose a single ‘serpentine’ line where possible – studies suggest that it feels quicker and fairer. Multiple individual queues also suffer when it comes to simple probability – the more queues there are, the less likely you are to end up in the fastest one.

You can read the full article ‘Secrets of savvy queuing’ in the August 2016 edition of Which?, out this week. If you’re not already a subscriber, you can sign up for a £1 trial to Which? to receive Which? magazine and gain full access to our website.

We surveyed 1,239 Which? members about what irks them the most about queuing and three quarters said staff not serving customers when there’s a long queue was their top gripe. The full top five are:

1. Staff not serving customers when there’s a long queue – 73%

According to Which? members, the most hated queue is at an airport where people are more likely to have to queue multiple times. The post office and supermarkets took second and third place. When we asked how you feel about paying to skip queues, the approval rating was 45%, though it rose to over half when it came to queuing in airports specifically.

However, there isn’t any way to pay to dodge the queues at supermarkets – right now, the only way to avoid them is to shop online. A quarter of Which? members already regularly do their grocery shopping online, and the number is rising.