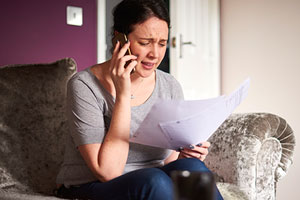 Thousands of customers may have been overcharged due to energy companies misreading gas meters, it has emerged.

The overcharging applies to some customers with older, imperial meters whose energy supplier has used the wrong type of gas usage data to calculate their bills.

Energy watchdog Ofgem believes that ‘several thousand’ may have been affected and has instructed suppliers to reimburse affected customers.

Regardless of whether you’re affected by this error or not, you could save more than £300 just by switching to a more competitive energy tariff.

Use our independent comparison site Which? Switch to compare gas and electricity deals and find the best one for you.

The problem occurred where energy companies confused old-style imperial gas meters with newer metric ones. This mean gas bills have been incorrectly calculated based on usage in cubic metres, when cubic feet should have been used. As a result, some customers have paid significantly more than they should have done.

But it’s not all bad news; the error will have worked in other customers’ favour. Some with newer metric meters have been billed based on cubic feet measurements, meaning they will have been undercharged.

Eon has identified 350 current customers it has overcharged and 250 who have been undercharged. It said that these customers won’t have to make up the difference. Ofgem has advised other energy companies to follow suit.

Trade body Energy UK said: ‘Any customer affected will be contacted shortly by their supplier and where there has been overcharging, a refund will be issued as quickly as possible.’

What should I do if I think my energy company has overcharged me?

This error doesn’t affect all customers with an gas imperial meter. If you have been overcharged, you will be contacted by your energy supplier and refunded the difference, along with interest. You should also receive some compensation for the problems caused.

If you have been undercharged it’s unlikely you will be asked to pay anything back – but be prepared for larger gas bills in the future.

Make sure you know your rights on energy. Check Which? Consumer Rights Energy advice for help on meter misreading, billing and payments, complaining, and more.