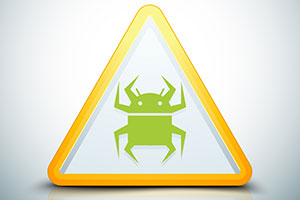 The Quadrooter bug for Android could affect mobile phones from Google, Sony and HTC

Hundreds of millions of mobile phones are at risk of vulnerability to scammers in the latest security issue to affect Android devices.

The bug, which has been found hidden in the mobile phones’ preloaded software, allows scammers to remotely get access to the affected  mobile. From there, they could potentially appropriate control of the device.

Which means that the owners’ private data – from bank details to Facebook photos – could end up in the attacker’s hands.

Not all Androids are at risk, so read on to find out if your phone is affected and what you should do if it is.

Protect your Android device with a Which? recommended app – see our Best Buy mobile security apps.

Is my mobile phone affected?

Any mobile phone that runs off a Qualcomm processor chip could be at risk from attack. In particular, we understand that the following UK handsets may be affected:

But this list isn’t exhaustive and we’ll add any more that become apparent as being in danger. We’ve asked Qualcomm for more information, but have so far heard nothing from it.

What should I do about it?

It’s understood that the major mobile manufacturers have been informed about the bug and it’s hoped that they will quickly release a patch or fix that you can download to prevent any harm. Keep an eye out for any prompts on your phone to install software updates.

In fact, it’s always advisable to update your phone with the latest iteration of your device’s operating system, whether it’s Android, Windows or Apple iOS for iPhones. Along with cosmetic and functionality changes, these updates often include security improvements, too.

And if you’re using an old smartphone that no longer gets support from the system operator, it may be worth considering a replacement. Check out our reviews of the latest mobile phones.

How can I protect my phone from viruses?

You can take common sense steps to keep your Android device free from risk. Only downloading apps from the official Google Play Store is a good way to avoid infected programs.

Downloading a mobile security app is an easy way to protect your smartphone or tablet from viruses, malware, phishing scams and identity theft. Many of those we test also have additional functionality – for example, to find a lost phone and prevent young eyes from accessing inappropriate apps.

The worst apps we’ve tested are barely any use at all, letting through cyber nasties like a sieve and, even if they do spot danger, the messaging is jam-packed with bamboozling jargon. So make sure you only install a Best Buy mobile security app.