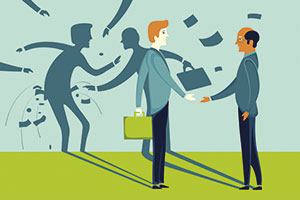 Scammers are using increasingly sophisticated psychological tactics to trick even savvy consumers into handing over cash, a Which? investigation shows.

The days of scam messages riddled with poor grammar or implausibly high winnings are over, and it’s now hard for many people to tell the difference between genuine communications and fraudulent ones.

In a recent test we asked a group of people to correctly identify genuine emails and scam ones, and, on average, they were able to do so 67% of the time, despite being confident they’d picked the right answer 84% of the time.

Tips for avoiding phishing and identity theft – our advice on how to avoid becoming a victim of fraud.

Scammers liberally use the ‘Six Key Principles of Persuasion’ coined by psychology professor Robert Cialdini. These principles are also used by highly effective sales people to influence and persuade you to buy goods or services.

Below are examples of how three of the principles are used by fraudsters in current scams:

Fraudsters use the branding of popular high street stores, such as Sainsbury’s and Marks & Spencer, to appear to offer you a gift card as a reward for being a loyal customer through an email. All they ask is for you to provide a few personal details in exchange or click on a link. The problem is your details may then be used for identity fraud or malware installed on your computer if you click through.

What to do: Look out for a strange email address – many of these emails won’t have the brand’s name in the email. But even if it is, that’s no guarantee that the email is genuine. The emails themselves could also be badly worded or the branding look odd (but it could also look very professional). Ultimately, anything offering a free gift card is most likely a fraud or will put you on the path to receiving unwanted marketing emails.

This scam often starts with an email or text offering the chance to win prizes from a well-known shop by simply filling in a short survey. By completing this, you then agree to its small print and by giving your personal details, including crucially your phone number, you are signing up to receive premium texts on an ongoing basis. People only realise they’ve been conned when they receive their phone bill.

What to do: If you decide to enter a competition, always real the small print to ensure you’re not signing up for something unwanted or to be spammed by premium rate texts.

Callers claim to be conducting a government official survey on behalf of government or a well-known company. They could ask you about anything – we’re heard about bogus surveys on washing machines through to private healthcare.Those who take part in them end up receiving nuisance sales calls and marketing targeted at them, based on their answers. People who then go onto buy from these firms are likely to pay over the odds for the product or service; and it may never materialise

What to do: Don’t talk to companies you haven’t agreed to hear from. If you receive calls like this, refuse to answer any questions. These surveys are simply a way to harvest information about you.

Evolution of the Microsoft/Windows support scam

A pop-up online chat window will appear on your screen, either while you’re browsing the internet or while you’re installing new antivirus software. The pop-up will warn you that your computer is running slowly due to viruses on it. If you allow the fraudster remote access to your computer they will then either charge you for software to remove the bogus viruses, install malware of their own or simply use the opportunity of having remote access to your computer to gather your personal details.

What to do: Anyone contacting you out of the blue about problems with your computer are not to be trusted – simply do not engage with them.

Lists of people’s contact details, are widely traded by those in the know (in places such as the dark web or in online forums) which can be sold on to con artists.

People on the lists then receive calls about an unmissable investment opportunities, and as well as being able to answer any of your questions the fraudsters will often have also prepared professional-looking sales materials and prospectuses.

Once you have invested once you will be contacted time and again about more unmissable investments, and your details will also be sold to other scammers. If you make one of these investments you will likely never see any returns and could lose the whole lot.

What to do: If someone cold calls you about an investment opportunity, hang up. If you are considering in making an investment, it’s wise to speak to an independent financial adviser first.

Which? recently  launched its ‘Safeguard us from Scams’ campaign, calling on the government’s Joint Fraud Taskforce to ensure businesses are taking proper responsibility when their customers are scammed and to review what systems they have in place to prevent this from happening.

You can support our ‘Safeguard us from Scams’ campaign by signing our online petition.