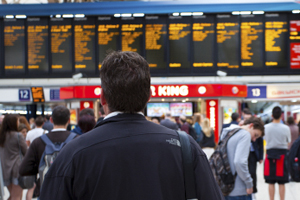 The rail industry will need to comply with the Consumer Rights Act in full from October this year, bringing it into line with other travel sectors.

The government has withdrawn an exemption from compliance with the Consumer Rights Act for the rail industrythat was due to go before Parliament for approval next week.

Rail Minister Paul Maynard said passengers who are unhappy with their compensation, which currently varies between operators, will be able to pursue their claim through the courts if they are unable to resolve the issue with the train company.

The Consumer Rights Act, which came into force on 1 October last year will apply to all transport services, including mainline passenger rail services, from the beginning of next month.

Are you sick of disrupted rail journeys? Use our advice to claim compensation for train delays and cancellations.

Which? Director of Policy and Campaigns Alex Neill said: ‘It’s great news for passengers that the rail industry will finally be brought into line with other travel sectors and will have to comply with the Consumer Rights Act in full from October this year.

‘Any further exemption would have seen rights for rail passengers delayed for another year, so we are pleased that the new Rail Minister is committed to putting passengers first.

‘The pressure is now on train companies to ensure that they are ready to implement the necessary changes to the current compensation system, and make it easier for passengers to claim for delays and cancellations.’

From 1 October 2016 rail customers will be entitled to seek statutory compensation under the Consumer Rights Act.

We are calling on train companies to ensure that their existing compensation schemes take these new rights into account.

After what has turned out to be a summer of discontent on Britain’s railways, it’s good to see this exemption has finally dropped in favour of rail passengers.

And this should be good news for the almost-45,000 supporters who have backed our campaign to Make Rail Refunds Easier.

With trust in rail at such a low point, Which? is calling on the government to introduce a statutory ombudsman to resolve passenger complaints that is mandatory for all train companies to join.