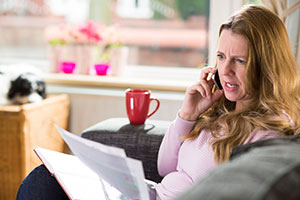 Small energy company Extra Energy has been rated as the worst for dealing with complaints, while SSE is the best, according to Citizen Advice’s latest league table.

Citizens Advice looked at the number of complaints that each energy supplier received from April to June 2016, then assigned a score based on the seriousness of the problem and how quickly it was resolved.

Extra Energy had a ‘complaint ratio’ of 1,791 for every 100,000 customers, which was 80 times higher than the provider with the fewest complaints, SSE.

This is the highest complaints ratio since Citizens Advice began putting together the data five years ago, highlighting the huge gulf in the way providers deal with customers’ problems.

We’ve surveyed thousands of energy customers to see what they really think of their provider – read our review of the best and worst energy companies to see who topped the table.

Other small energy companies also haven’t fared well at dealing with issues – Co-operative Energy was the second-worst provider with a ratio of 850.

While the Big Six energy companies tend to falter in our annual energy survey, EDF Energy came second with a ratio of 31, followed by E Energy with 36. British Gas took fourth place with a ratio of 80.

But big-name energy companies Scottish Power and Npower didn’t do as well, coming in third and forth from the bottom with 572 and 383 respectively.

These latest figures on complaints handling also show that some energy providers aren’t improving – Extra Energy came last for the second year in a row – or are getting worse at dealing with customer problems – Flow Energy’s complaints ratio quadrupled in the last quarter, and Ecotricity’s score doubled.

Late or inaccurate bills and difficulty getting through to the customer service team on the phone were listed as the main problems with Extra Energy.

When we investigated energy company call-waiting times in November 2015, Extra Energy came last with an average waiting time of nearly half an hour (26 minutes), while the best, Ebico, answered on average in just half a minute.

Find out what our energy company satisfaction survey revealed about Extra Energy when we asked thousands of energy customers to rate it for value for money, accuracy and clarity of bills, customer service, the way it deals with complaints and whether it helps them to save money.