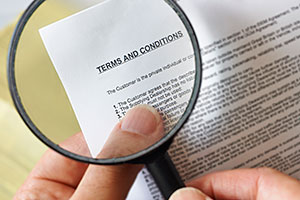 Which? reveals unknown quirks and exclusions that affect the price you pay for your insurance, to help you make smarter choices and cut costs.

When insurance policy documents are full of baffling jargon and can stretch to the size of a novel, it’s no wonder some people don’t bother reading the small print.

Insurance policies are ‘too long and complicated’ and use ‘incomprehensible jargon’ – that’s what people told us when we surveyed 1,001 members of the general public in August this year.

Half (49%) said they think insurance policies are ‘fairly’, or ‘very’ difficult to understand. Many people admitted they only bother to skim read terms and conditions, including 40% of those with car insurance and 39% of those with home insurance.

Customers risk discovering exclusions at the worst possible moment – when they attempt to make a claim – or choosing poor-value products that don’t suit their needs.

We gathered hundreds of online insurance quotes from a leading comparison site and major insurers to uncover some of the surprising factors that affect your insurance premiums and unexpected exclusions to watch out for when you take out a policy.

We gathered online insurance quotes from a leading comparison site and leading insurers: Aviva, Direct Line, John Lewis, Lloyds, More Than, RIAS and Tesco. Here are some of the quirks we found:

Some insurers think the streets are safer than your garage

Two thirds (67%) of the public expected a driver who keeps their car on a driveway, instead of a garage, to pay more for their car insurance.

But, Which? found that some premiums increased by as much as 23% when insurers were told that the vehicle was locked in a garage overnight.

Only Churchill, Direct Line, John Lewis and Privilege charged the driver the same, no matter where they parked.

Some insurers changed their home insurance prices when quotes were obtained for a single mother of three, rather than living with a partner.

Aviva charged an extra 21% (£91) when this was changed, while RIAS and John Lewis kept premiums the same for both.

Other insurers that charged a single-parent household more for the same insurance policy included LV (which increased premiums by 6%), Nationwide (3%), Direct Line, Privilege, Churchill (all 2%) and Bradford & Bingley (1%).

Having a burglar alarm fitted to your property doesn’t make your home insurance any cheaper. Most insurers in our test made no deductions at all.

In fact, Which? found insurer More Than charged £1.24 more for having one installed.

Unexpected exclusions to watch out for

If your family plans even the most basic activities on holiday, check which are covered before you go.

One in five (20%) travel insurers refuse to cover accidents caused by banana boats in a standard annual policy, compared to 12% who don’t cover bungee jumping. A quarter (26%) also offer no cover for sea kayaking.

Your boiler may not be covered in the summer

Nearly half (45%) of people surveyed thought that home emergency cover would protect them all year around, but Defaqto data shows 11% of policies with central heating protection apply an exclusion period ranging from May to September.

You might expect European travel insurance to cover Cyprus, Spain, and Turkey, and worldwide cover to include the USA, Canada and the Caribbean, but many insurers ask holidaymakers to take out separate insurance to cover these countries, largely due to the possibility of higher medical costs.

You can expect to pay more for insurance covering these places, so ensure you select the relevant region when you take out a policy.

Metro Bank announces new overdraft rate: how does it compare?

New £20 note launches today: how much are your old banknotes worth?

Inflation jumped in January 2020: what does this mean for your savings?