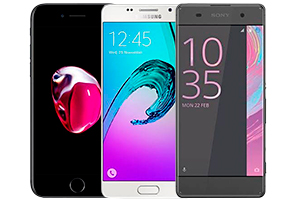 Phones from brands such as Apple, Samsung and Sony go head-to-head

We’ve tested another ten mobile phones, including the iPhone 7 and 7 Plus as well as other smartphones from Samsung, LG and Sony. Which models stand head-and-shoulders above the rest, and which are you better off without?

The best on test breezed through our tough assessments to earn an impeccable 92%. Its super speedy processor won’t struggle running the latest apps or games, and you’ll be able to surf the web for 12.5 hours before needing the charger.

Plus, you’ll be happy to share the photos it takes – and you’ll be delighted with its stunning display.

The worst of the bunch, on the other hand, is really let down by its poor battery life. Offering just under 11 hours of call time or a paltry four hours of web browsing, it’s particularly poor by today’s standards.

Just want to know which are the best smartphones to buy? Head to our Best Buy mobile phones.

There’s a huge £604 price difference between the priciest and cheapest mobile phones on test. While Apple’s iPhone 7 Plus (32GB) will set you back by an eye-watering £719, you can pick up the LG K8 (8GB) for a very affordable £115. 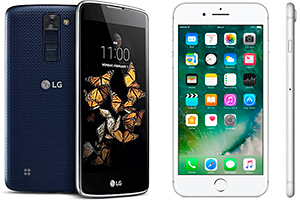 The iPhone 7 Plus looks more premium than the LG, plus it’s water resistant and has a 12MP rear camera to the LG K8’a 8MP snapper. And the iPhone 7’s telephoto lens is designed to help you take clearer photos when zooming into the distance.

The LG K8 may not have as many features as the iPhone, but our tests also cover the basics. We put all phones through the same assessments, looking at all the most important aspects of a phone’s performance – including battery life, ease-of-use and processor speed. And because we’re independent and don’t take any advertising, you can trust our reviews to give you an honest picture of how phones stack up against one another.

Plus, we’ve found there’s no hard-and-fast link between price and quality – spending more doesn’t always guarantee a better phone, so it’s well worth reading our mobile phone reviews before parting with your money.

How much mobile phone storage space do you actually have?

You always have less storage space to play with than what’s claimed. That’s because a reasonable amount of the storage space is taken up by the phone’s operating system and any pre-installed apps.

The amount of usable space can also vary between models with the same claimed memory. For instance, both the Motorola Moto G4 and Sony Xperia XA claim 16GB – but while the former offers 10.34GB of usable storage, the latter gives you just 8.48GB.

The good news is that many Android-powered mobile phones let you insert a micro-SD card to increase storage. You’ll want to consider this with phone’s such as the LG K8, which gives you just 3.26GB of usable space.

You can’t currently do this with iPhones, though – so you’re stuck with the built-in storage offered by Apple.

Click on the links below to head to our individual review of each smartphone. Phones are listed in alphabetical order.

Prices are correct as of 19 October 2016 and are subject to change.