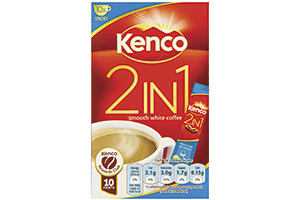 Kenco’s 2-in-1 smooth white coffee sachets contain half the amount of coffee, and almost triple the sugar, as they did before July

Exclusive Which? research reveals that Kenco has cut back on the coffee content of its 2-in-1 smooth white coffee sachets by 48% – but upped the sugar content almost threefold.

That’s an additional 168% of sugar in the drink. But coffee drinkers may not realise they’re drinking more sugar than before, as the change to the recipe hasn’t been made clear on the packaging.

If you’re looking for great-tasting, effortless coffee, see which ones our experts rated as the best Nespresso-compatible coffee capsules.

Kenco changed the recipe of its 2-in-1 smooth white coffee sachets in July 2016. Nutritional information is printed on the packet, but coffee drinkers may not realise the change unless they’ve compared previous sachets with current ones.

Richard Headland ,Which? magazine editor, said: ‘Shoppers are now much more aware of the health risks of hidden sugars in food and drink, which makes Kenco’s decision to nearly triple the sugar content hard to justify.

‘When manufacturers roll out lower-sugar versions of a product, they’re quick to advertise the fact. In this case, though, Kenco drastically increased the sugar but left its regular drinkers none the wiser.’

Kenco told us that the drink had been reformulated to use a coffee which was ‘stronger’ and of a ‘higher quality’. So its amount had been reduced to reach the ‘desired flavour profile’.

It also said that the calories, fat and saturated fat had been cut.

How to make great coffee

Avoid hidden added sugar in coffee sachets – and reduce your spend on takeaway coffees – by making your own at home. Our coffee machine reviews include bean-to-cup, traditional ground and capsule coffee machines to help you find one that suits your coffee-drinking habits.

If quick, mess-free coffee is top of your agenda, a capsule coffee machine may suit you best. Many are easy to use and clean, and are made by brands including Nespresso, Tassimo and Dolce Gusto. If you’re not a regular coffee-drinker, the capsules keep coffee fresh.

The freshest possible coffee is made by bean-to-cup machines, which have a built-in grinder. Although generally easier to use than other types, they’re also pricey. Some models cost more than £1,000, although we’ve found a number of Best Buys for less than £400.

A ground coffee machine (also known as an espresso machine) gives you the most flexibility. You’re not tied to using a particular coffee brand, and can make your coffee exactly the strength you want by adjusting the amount of ground coffee and water you use.

They also tend to be cheaper and lighter than bean-to-cup machines – Best Buy ground coffee machines start at just £70.