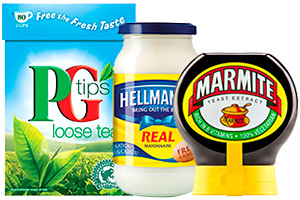 These products and others are unavailable at Tesco online

Issues surrounding the supply of Unilever products such as Marmite, PG Tips and Hellmans Mayonnaise to Tesco have been resolved, according to spokespeople for the firms.

Concern over a looming Marmite shortage had been mounting this week when the popular spread and many other iconic Unilever products became unavailable on Tesco’s website and in-store stocks also began to run low.

A statement released by Unilever on Thursday evening said: ‘Unilever is pleased to confirm that the supply situation with Tesco in the UK and Ireland has now been successfully resolved.’

‘We have been working together closely to reach this resolution and ensure our much-loved brands are once again fully available.’

Unilever products back on sale

The freeze on sales of Unilever store cupboard favourites — which also include Surf washing powder and Ben & Jerry’s ice cream — had stemmed from a tense price dispute between Tesco and Unilever.

Unilever had told Tesco it intended to raise its prices by about 10% to compensate for the recent drop in the value of the pound. It justified its proposed price hike as ‘normal’ following the pound’s falling value, but Tesco attempted to block the move.

Price increases are particularly worrying for the big supermarkets in light of increasing numbers of consumers flocking to discounters Aldi and Lidl.

Related: UK’s best and worst supermarkets revealed by Which? poll.

To see how the Brexit vote has so far affected the price of Unilever products, we compared the prices of some its everyday products between 23 June’s Brexit vote and 13 October 2016, to see how they’ve changed at Asda, Morrisons, Sainsbury’s and Tesco.

The results show a mix of price increases and decreases for the Unilever products that we looked at.

The average price of Ben & Jerry’s Cookie Dough Ice Cream (500ml) fell by around a third in Tesco, Asda and Sainsbury’s, and the price of Marmite remained quite stable.

But the average price of Surf Essential Oils Powder Tropical Lily & Ylang Ylang (1.61kg) rose by as much as two-thirds in three of the big four supermarkets.

Despite a turbulent few months for Britain’s supermarkets, our monthly supermarket price comparison has shown that the cheapest supermarket has remained consistent.

September was the sixth month in a row that Asda topped our price comparison. The 78 popular branded products that we price checked cost £148.39 at Asda, with one of its rivals close behind at £151.12.

At the other end of the scale, the same items cost £163.90 in the most expensive supermarket – which means you’d shell out £15.51 more than at Asda.

Each month, we compare the price of a basket of branded items at the six big supermarkets. You can get the full story on our supermarket price comparison page.