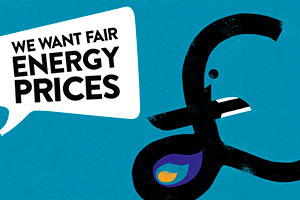 Are you paying more than you need to for gas and electricity?

Consumers are spending £1.4 billion more than they need to on gas and electricity, according to a recent market investigation. So at Which? we’re challenging energy companies to show how they’re helping customers stuck on the worst deals.

Around 16 million people, or 58% of energy customers, are on a standard variable tariff with one of the biggest six energy companies. This is usually their most expensive deal, and switching to one of the cheapest deals on the market could save each household around £300 per year.

An investigation into the energy market by the Competition and Markets Authority (CMA) concluded that more must be done to get energy companies to engage with these customers.

But exclusive Which? research has found that three quarters (74%) of people said they haven’t been contacted by their energy supplier about changing their tariff in the four months since the investigation finished*.

So we’re calling on all energy companies to find new ways of getting customers stuck on poor value deals to move to a better one.

Find out more about our Fair Energy Prices campaign and pledge your support.

We want energy companies to publish plans by 31 January 2017 on how they will engage customers on pricey standard variable tariffs. Our Fair Energy Prices campaign is also expecting energy suppliers to take immediate steps to help these customers this winter.

Which? managing director of home and legal services Alex Neill said ‘This is the last-chance saloon for the energy industry. After a two-year inquiry, the energy companies now must prove they are taking action to genuinely engage with their customers stuck on the worst deals. The Government and the regulator must be ready to act if energy companies fail to deliver.’

We’ll be publishing a scorecard to track how every energy company is doing – and so you can see what action your energy supplier is taking. The Government and the regulator must be ready to act if companies fail to deliver for their customers.

Our Fair Energy Prices campaign has had 480,000 signatures so far and fed into the CMA investigation.

The gap between the average price of a standard variable energy tariff (with a Big Six supplier) and the cheapest deal on the market has grown by £111 over the last two years, Which? research has revealed.

Use our independent switching service, Which? Switch, to find the cheapest energy deal for you.

(Prices are based on a typical medium household using 12,500kWh gas and 3,100kWh electricity per year, paying by monthly direct debit, paperless billing and averaged across all UK regions. Prices correct at 2 November 2016.)

What’s new in Which? magazine: November 2020