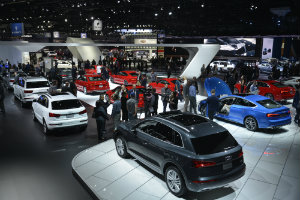 The motoring world has descended on the City of Angels this week, as the 2016 LA motor show gets into full swing.

Unlike the biggest European shows such as Paris or Geneva, the Los Angeles event is dominated largely by US market offerings.

However, among the enormous SUVs and be-winged racing cars, there is a large presence from European manufacturers, which have been revealing all-new models soon to be making an appearance at a showroom near you. 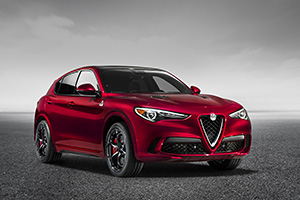 After a number of years in the doldrums with a modest range of also-ran hatchbacks, Italian marque Alfa Romeo is enjoying something of a resurgence. Hot on the heels of the stunning Giulia executive saloon is this, the Stelvio SUV. This premium, mid-sized off roader is expected to start from around £35,000 when it goes on sale next year, putting it in the firing line of popular upmarket crossover models such as the Audi Q5 and Range Rover Evoque.

Sharing its curvaceous good looks and minimalist, driver-focussed cabin with the Guilia, the Stelvio will offer seating for five, and will be available with four-wheel-drive.

While it’s the diesel versions that are likely to prove most popular in the UK, it has been unveiled first in high-performance ‘Quadrifoglio’ trim, which gets a muscular 503bhp, turbocharged 2.9-litre engine for true sports car pace. It will go head to head with the likes of the Porsche Macan and Mercedes-AMG GLC 63. 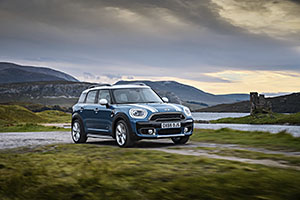 A crossover SUV that needs no introduction is the Mini Countryman. This all-new, second-generation model is more of a subtle evolution of the high-riding hatchback concept, rather than a wholesale revision of the original model. Incidentally, it’s the largest car ever to wear the Mini badge.

In addition to the more aggressive styling, expect improvements to passenger space, as well as greater efficiency from its range of engines, which for the first time on a Mini will include a plug-in hybrid version.

Boot size – a consistent criticism of the Mini range – has improved too, with the Countryman now claiming a larger luggage space than the Nissan Qashqai. Being a Mini, it also gets a host of quirky design details, including a ‘picnic bench’ – essentially a padded fold-down rear boot lip that acts as a rear seat for outdoor activities.

Priced from £22,465, the Mini Countryman is available to order at UK dealerships now, with the first customer deliveries expected in February 2017.

If you’re already subscribed to Which?, log in to see more than 700 car reviews, or to find out what makes Which? reviews unique join Which? and discover our reviews for yourself. 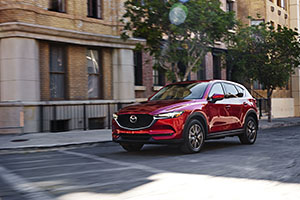 Unveiling its own all-new mid-sized crossover in LA is Mazda, which has lifted the covers off its second-generation CX-5.

Being its best-selling European model, the Japanese manufacturer is taking no chances with the new CX-5, which is due to reach showrooms in mid-2017. Like the Mini, it exhibits lots of detail improvements, including sharper design, a lower stance and a slightly longer body than the outgoing version.

The interior is also subtly improved, with a crisper LCD information display and revised rear seats that claim to offer greater room for passengers.

Full engine details have yet to be made public, but Mazda’s 2.0-litre petrol and 2.2-litre diesel ‘Skyactiv’ engines are expected to be offered, with improvements to both cleanliness and fuel consumption. Prices are also yet to be announced, but we’d estimate the new CX-5 will start from around £23,000. 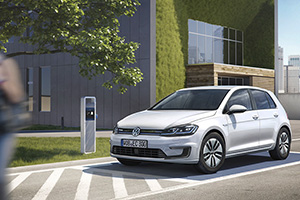 Volkswagen has updated its battery-powered e-Golf, which is one of the highest-scoring hatchbacks we’ve tested. The plug-in model gets the mild exterior design updates recently announced for the rest of the Golf range as part of its mid-life facelift, but improvements to its battery and electric motor boost usability.

Volkswagen claims the e-Golf’s range has been bumped up by a massive 50% to a total of 186 miles thanks to a larger battery pack, while total power has been massaged up to 134bhp.

Alongside the updated version of the standard Golf, the e-Golf now gets a digital instrument panel and gesture control for the media system. It goes on sale in the first half of 2017. 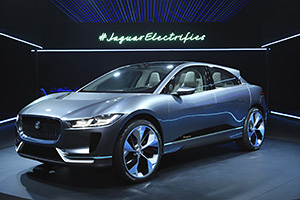 It wouldn’t be a motor show without at least one futuristic concept car to get excited about. And unlike most such ‘design studies’ (read: never likely to see the light of day), Jaguar’s new I-Pace points the way towards a brand-new electric luxury SUV, which is due to go on sale in 2018.

Claiming at least 300 miles of range between charges, and performance stats including a 0-62mph sprint time of around four seconds, the I-Pace could be the first direct rival to the Model X  – the six-seat all-electric MPV from Tesla.

Despite being shorter than Jaguar’s new F-Pace SUV, it claims greater passenger room thanks to a longer wheelbase. The concept’s boot measures in at 530 litres with the seats in place, though whether stays the same for the production version remains to be seen.