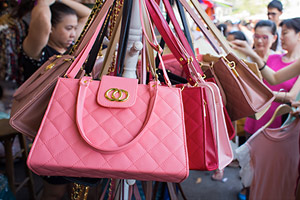 Sales shoppers are being warned to be on alert after fake goods being sold by traders using Facebook and Instagram were seized during a series of raids.

Thousands of items, including dangerous cosmetics, electrical products and chargers, were seized.

Counterfeit footwear, leather goods and tobacco were also found in various raids across the UK.

The operation, which was led by the Trading Standards e-crime team, targeted markets where the suppliers of these traders were thought to operate.

The raids were the result of intelligence work that included information recovered from mobile phones and satellite navigation systems found during previous raids.

Use our tips to your rights and staying safe when buying or selling on Facebook Marketplace.

The government has also revealed details of massive hauls of fake goods at the UK’s borders, with aftershave, cuddly toys, trainers, scarves and Harry Potter wands among items seized by Border Force in the weeks before Christmas.

In total, more than 83,000 items were confiscated at airports in a single operation across six days earlier this month.

Genuine goods or not?

Once items are seized, Border Force’s specialist international trade teams work with the owners of big brands to establish whether or not goods are genuine.

If they are fake, the items are destroyed and the rights holders can then decide whether to privately prosecute the importers.

Matthew Cope, of the Intellectual Property Office, said: ‘We have worked with Border Force and rights holders at borders across the UK to intensify our efforts in targeted pre-Christmas activity.

‘We have detained goods destined for shops and markets, proving the worth of the coordinated approach. It is important that we have a united response and that people are protected from this type of crime.

‘Anyone looking for a bargain should be wary of prices which look too good to be true, from cut-price alcohol to heavily discounted electronics, and report anything suspicious.’