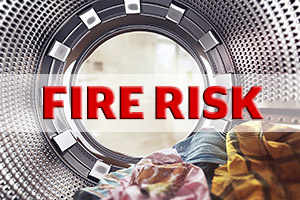 A new investigation from Which? shows that, one year on from announcing the tumble dryer fire issue affecting millions across the UK, Whirlpool is still failing its affected customers.

We first investigated the Whirlpool tumble dryer safety issue in April this year and launched a second investigation in November 2016.

We found that one in five (22%) of the affected customers surveyed in April are still waiting for their machine to be repaired or replaced. A third (33%) of customers who had since had their dryer repaired or replaced, said they were dissatisfied with how the manufacturer had handled the situation.

Six in ten (62%) of those we surveyed for the first time in November 2016 who had decided to wait for a repair were concerned about using their tumble dryer.

One quarter (26%) of affected customers were told they would have to wait longer than six months for their tumble dryer to be repaired. One in five (22%) were told that the wait would be between three and six months.

In addition to affected customers being forced to wait far too long, we found Whirlpool giving a customer incorrect and potentially dangerous advice. Posing as customers with affected machines, we made 30 calls to the Whirlpool call centre and found:

Which? managing director of home & legal services, Alex Neill, said: ‘It is absolutely unacceptable that, one year on, Whirlpool customers are still seeing slow, poor service and potentially receiving incorrect and dangerous advice. Its modification programme is clearly not progressing as fast as it should.

‘Following the devastating fire caused by a tumble dryer in Shepherd’s Bush earlier this year, Whirlpool cannot be allowed to continue letting consumers down. It must clean up its act and sort out this mess urgently.’

When we asked Whirlpool to comment on our findings, it said: ‘We urge everyone who owns an Indesit, Hotpoint or Creda dryer manufactured between April 2004 and September 2015 to check if their dryer is affected and then register for a free modification if it is. Customers can do this using the model checker on two bespoke websites we have created:

‘The safety of consumers is our number one priority and we are committed to doing everything we can to ensure that the tumble dryer modification programme is carried out in a safe and timely manner.’