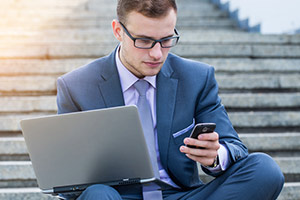 Ofcom started investigating EE in January 2016 and discovered that the mobile phone provider had broken a fundamental billing rule on two separate occasions.

The investigation concluded that EE’s carelessness or negligence contributed to these billing errors, and also found that EE had decided not to reimburse the majority of affected customers until Ofcom intervened.

Find out what you can do if you’ve received an excessive bill after using your mobile abroad.

Incorrect charges to customers roaming in the EU

EE customers who called the company’s ‘150’ customer services number while roaming in the EU were incorrectly charged as if they had called the US.

In addition to this, EE continued to bill 7,674 customers up until 11 January 2016 for calls and texts to the ‘150’ number from within the EU, even though this service was made free from November 2015.

Data usage and mobile roaming charges are capped across EU countries, so it shouldn’t be possible to run up a huge mobile phone bills on data charges alone.

If you capped your mobile phone usage and the bill was above this threshold, then you can complain to your mobile operator.

Read our guide for how to challenge a phone bill that is too high.

Customers still out of pocket

Vickie Sheriff, director of campaigns and communications at Which?, said: ‘If it wasn’t for the regulator’s intervention, thousands of customers would have been out of pocket due to EE’s mistakes.

‘Customers shouldn’t have to wait for the regulator to step in to get an apology and their money back.’

Regulator Ofcom recognises that the majority of customers have now been refunded. However, EE was unable to identify at least 6,905 customers, who were more than £60,000 out of pocket in total.

As a result, Ofcom is requiring EE to make further attempts to trace and refund every customer who was overcharged.