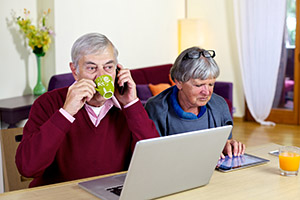 Older email users in the UK are most at risk of being targeted by email scammers, according to a recent survey by insurance provider Aviva.

The report warned that more than one million older people in the UK could have been duped by email scammers.

Over-75s were revealed to be most at risk, with 8% falling prey to email scammers, the Real Retirement report found.

Almost one in four of the age group said technology had made them feel vulnerable.

If technology makes you feel at risk, take a look at our internet scams advice page, which includes step-by-step guides, FAQs and template letters of complaint.

Email most popular form of scam

Email appears to be the most popular form of scam, with 73% of people being contacted by scammers this way.

Almost three quarters of over-45s with internet access said they had been targeted by an email scam and 6% of them said they had fallen for the trap.

Scam emails, also referred to as phishing emails, try to trick you into sharing your personal data, such as bank details. You should never reply to an email that claims to be from your bank or a government department.

With fraud now at record levels, Which? is calling on the government and regulators to safeguard people from scams.

If you’ve been the victim of a scam email, you can use our letter template to request reimbursement from the bank.

The Real Retirement report also found that 60% of people had been contacted by phone.

If you’re concerned about a company or a number making nuisance calls and texts, you can use our free tool to complain to the Telephone Preference Service, your phone operator, Ofcom or the Information Commissioner’s Office.

Which? is campaigning to call time on nuisance calls and texts. We’re asking the government, regulators and businesses to take action to protect people from unwanted callers and to give consumers more control over how their personal data is used.

Sign our petition to take action on unwanted calls.

He said: ‘The government is rightly taking action to combat the threat of pension cold callers in later life, but it is important we don’t forget the additional threats that exist in the digital age.’

A government consultation is currently under way on a cold-calling ban to ‘cut off a key source of pension scams’.