We’ve already put the Amazon Echo through our wireless speaker test to find out how good it sounds and now we’ve tested how good it is at controlling a smart home.

The Amazon Echo is an interesting proposition. A wireless speaker with a built-in voice assistant is exciting enough on it’s own but the Echo can control your smart devices, too. It’s doing a lot of things and, thanks to voice control, it’s doing them in a way most other speakers and smart hubs don’t. Has Amazon bitten off more than it can chew? Or is the Echo a complete solution for your wireless music and smart home control?

A smart hub’s job is to make it easier to control an array of different smart devices, from security cameras to light bulbs to kettles. Most hubs do this by letting you control everything in one app rather than a separate one for each device. The Echo does this with voice commands. Read on to see if the added features help the Echo’s cause, or add unnecessary complications.

How is the Amazon Echo different to conventional smart hubs?

Alexa is the difference. She’s your own voice-activated personal assistant inside the Echo and she is always eager to help. Her name is the wake-up word – if your Echo hears it then it will listen and respond to whatever you say next. Your requests can be as simple as asking for the time or to play a particular song, and it’s a credit to the Echo that asking Alexa to control your smart devices is just as simple.

The Echo has its own app store of sorts where you can download ‘skills’. These skills are what allows the Echo to work with a number of smart devices from various manufacturers. If you enable the Philips Hue skill you will be able to control compatible smart light bulbs with voice commands such as, ‘Alexa, dim the living room lights’. All the skills available are completely free, but they aren’t all worth having. There are dozens of skills that tell you facts about cats, for example, or if you prefer canines to felines you could try the one that makes Alexa bark.

So is the Echo the perfect smart hub? 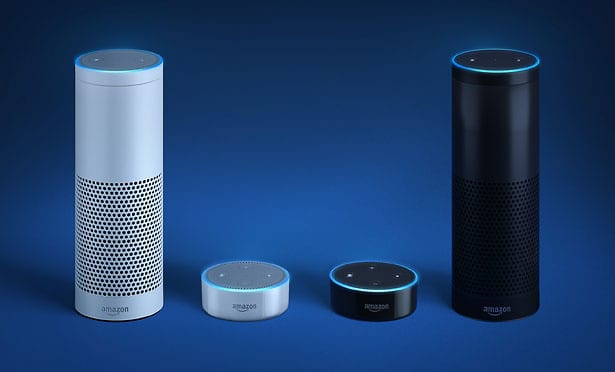 As joyous as well-executed voice control is, and it really is joyous, it does have its limitations. If the Echo can’t hear you then it can’t execute your commands. There are ways around this, such as using the Echo remote, which lets you communicate with your Echo when you aren’t in the same room, but it’s of no use if you aren’t in the same building or country.

One of the big appeals of smart homes is the security. Being able to see what your wireless security camera sees from anywhere in the world is appealing. Traditional smart hubs that control your home with a dedicated app should show your wireless security feed without the need to flick between apps. An Echo can’t do this. The second you’re out of your home you need to revert back to using different apps to control different devices. Ideally, a smart hub means you never need to touch the separate apps again – the dedicated app should control everything. The Echo is almost the exact opposite of this.

Improvements to the Echo’s app would mitigate the problem, but Amazon has gone all in with voice control and the usefulness of the app is secondary. As a result, the Echo is well suited when you’re at home, but limited once you step outside.

What about the Echo Dot?

If you’ve been on amazon.co.uk recently you may have spotted the Echo’s smaller sibling, the Echo Dot. It’s a third of the price, so does it have a third of the function? The short answer is no, it works in exactly the same way. Alexa is still in there and she doesn’t even have a high-pitched voice. The only real difference is sound quality. There is a speaker in the Echo Dot, but if you played your favourite tunes on it they wouldn’t be your favourites for long.

To be fair to the Dot, it isn’t designed for music, it’s designed for the speakers you already have. Connect it via Bluetooth or a 3.5mm cable and Alexa’s dulcet tones and your music will play through your existing equipment. It’s a smart move since many people already have speakers and hi-fis they are happy with, and paying £150 for an Echo with a speaker you don’t need is a much harder sell than a £50 one with all the same features.