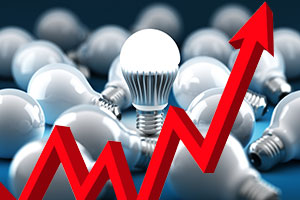 Are you an Npower customer facing rising prices? Switch now to keep your energy bill down.

Energy supplier Npower has announced it will put up electricity prices by 15% and gas prices by 4.8% for customers on its standard tariff.

The price rise will take effect from 16 March and increase the cost of a typical dual-fuel energy bill by £109 on average over a year.

If you’re an Npower customer, the price rises will affect you if you are on its standard tariff. Npower says this is around half of its customers. If you have a fixed-price energy deal with Npower, the price rises won’t impact you until your tariff ends.

Npower’s price rise is one of the largest single increases announced in recent years, although it’s not the first energy supplier to state a price rise this year. British Gas, EDF Energy, Eon and SSE are among firms which have frozen their prices – but only until spring.

If you’re an Npower customer on a standard tariff, use our independent site Which? Switch to find a cheap gas and electricity deal and keep your energy bills down when Npower puts its prices up.

What Npower customers need to know

If you’re on Npower’s standard tariff (called Npower Standard Variable), your bills will go up by 9.8% on average (based on a typical annual dual-fuel bill) after the price rise in March. But if you have a prepayment meter, this price rise won’t affect you.

If you receive the Warm Home Discount, you will get a one-off discount on your first bill after 16 March. This will be £13 for electricity and £4 for gas.

There is no exit fee on a standard tariff, so you can switch to a cheaper deal or different energy supplier now without paying a penalty. It can take several weeks to complete your switch, so act now to beat the price hike.

Npower came last in our recent energy company customer satisfaction survey, with a customer score of 44%. The highest-scoring supplier, Ovo, scored 78%. Npower was also the only energy firm rated one star for value for money, according to its customers.

Our investigation revealed huge differences between the best and worst energy suppliers, including on what customers think of their service, how quickly energy firms answer the phone, and the accuracy and clarity of their bills.

Use our results to help you find an energy supplier that’s cheap – and gives good service. See the best and worst energy companies.

Will other energy firms put up prices?

Good Energy will also put up its prices by 10% for electricity and 11.5% for gas for customers on its standard tariff, from 1 March. This will mean an average increase of £10 per month for dual-fuel customers. In autumn 2016, it announced a price freeze until March 2017.

Which? energy expert Sarah Ingrams said: ‘When these price freezes end, other big suppliers may follow Npower and increase prices for customers. If you’re on a standard variable tariff with any energy supplier, look for a cheaper fixed deal now to avoid your bills rising if your energy supplier hikes prices.’

EDF Energy has already confirmed that it will raise electricity prices for standard tariff customers by 8.4% on 1 March. This follows a cut in its gas prices of 5.2% in January 2017. Scottish Power did not freeze its prices.

We’ll be keeping an eye on prices to let you know if your bills are set to rise.

Npower blamed increases in wholesale energy costs, and rises in the costs of delivering government policies over the past three years for its price rises. It said it thinks this trend will continue, and that network and policy costs will make up an increasingly large part of consumers’ electricity bills.

Over the winter months, we’ve seen the cheapest gas and electricity deals disappear from the market. This suggests that the energy firms might be expecting their prices to go up. But you can still save around £200 by switching energy deal, according to our latest research.

You can contact Npower customer services on 0800 073 3000 with any questions about the price rise.